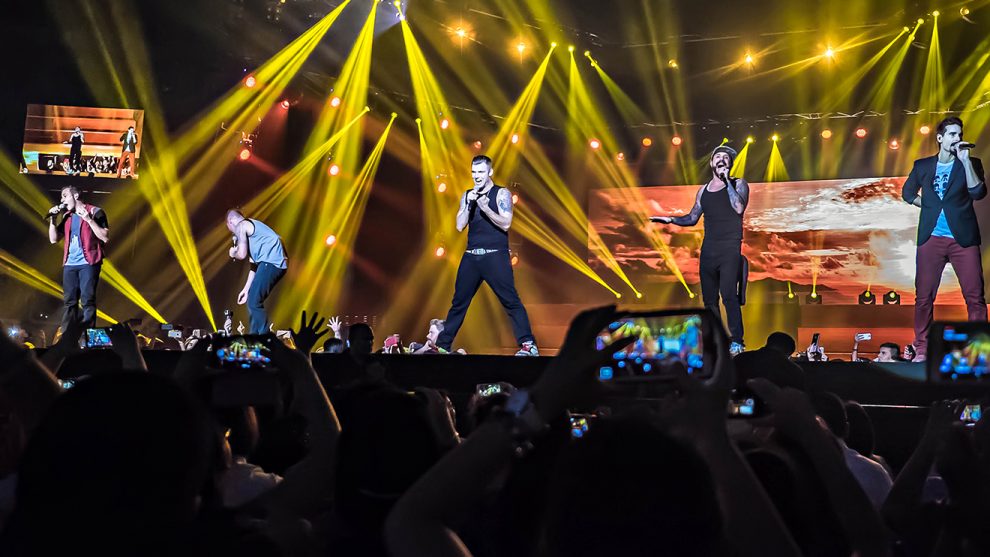 Fourteen concertgoers were injured Saturday when a severe, sudden storm blew over supports at an outdoor performance venue in Oklahoma ahead of an appearance by the Backstreet Boys, officials said.

About 150 concertgoers were waiting in line at the WinStar World Casino and Resort in Thackerville when the storm struck at 5:30 p.m. CDT, according to the resort. Winds estimated at up to 80 mph blew over trusses at the entrance to the venue, resulting in the injuries.

Waiting and praying for our fans that were injured. If we can perform were ready to go. But safety is first. pic.twitter.com/0GlB9fbmoc

The injured were treated at the scene by Love County, Oklahoma, paramedics and others who responded along with police and highway patrol officers. They were taken to local hospitals. Two had been released, the resort officials said.

“We know that fans often suffer through inclement weather for their favorite acts, but this was an unusual event and our thoughts are with those who were injured during this storm,” said Kym Koch Thompson, a WinStar spokeswoman.

The concert by Backstreet Boy and 98 Degrees was canceled. Officials said it would be rescheduled at a later date.

We never want to put our fans in harm's way and with tonight’s weather and the injuries from earlier, we have decided to cancel the show and will attempt to reschedule. The most important thing is for everyone to get home safely and we will see you all very soon!

Video taken by some of those at the scene show throngs of fans and emergency vehicles. One of the Backstreet Boys, Kevin Richardson, tweeted that emergency crews were on the scene after a tent collapse and the injuries were among those seeking shelter. He said 12,000 fans had been expected for the concert.

Hey folks! Severe weather, high winds and rain just passed thru here in Thackerville, OK. Emergency crews are on the seen as tent calapsed and some folks who were seeking shelter were injured. Waiting to determine damage to our stage and production. Status of show TBD. ✌🏻❤️

Update… unfortunately, due to damage sustained in the storm earlier this evening, we are unable to perform the show tonight. Safety is always #1. Keep your tickets because, Backstreet WILL BE BACK! ✌🏻❤️

He later tweeted that safety inspectors were checking “the structural integrity of the stage before any of our crew can get on the stage to assess the damage to our lights, sound and production elements.”

Officials say they had seen the storm coming and warned concertgoers to take cover. They observed lightning about 4 miles away a half hour before the storm struck. Those still in line “did not heed staff’s warnings,” the resort’s statement said.