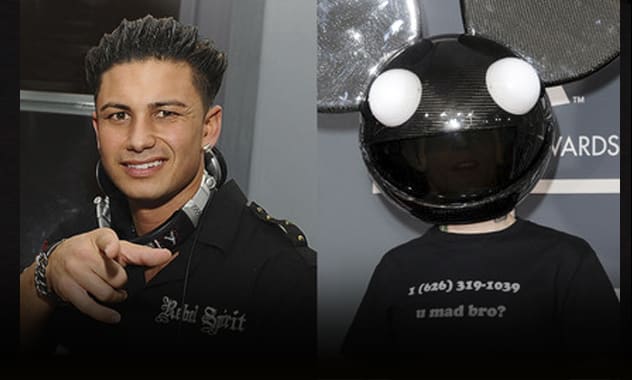 It’s a battle between the indestructible blowout and the giant mouse  head.

“Well since you asked, i didn’t really enjoy it. it looked like it cost about  $150 to make, and nothing really creative about it,” he wrote.

And off we go…

“Hating? the f–k? you clearly don’t know me enough if you thought that was  ‘hating’. was just some friendly-ish advice,” Deadmau5 responded.

“Wonder If I Could Get @Deadmau5 To DJ My Birthday ?? Now  That Would Be The #NightOfMyLife,” The  Pauly D Project star continued. “Maybe He Just Needs Some Cheese To Go With His  Whine … #WheresMyMau5Trap”

After fans got involved and multiple tweets on the whole shenanigan were  exchanged, the feud came to (what seems to be) an end.

“Well DeadMau5  Today Was A Pleasure , Hope U Had Fun Too , But I Got Show To Watch Tonight #PaulyDProject U  Should Tune In @MTV,”  Pauly posted.

So does this mean a Pauly D and Deadmau5 collabo is out of the question?