At only 24 years old, it looks like Jennifer Lawrence is the highest-grossing actor this year.

Forbes recently released its list of the top-grossing actors of 2014 and the Hunger Games star took the first spot.

The Oscar award-winning actress will not only be finishing up her role as Katniss Everdeen in the finale of The Hunger Games: Mockingjay next year, but she is also known for previous roles in films such as X-Men, American Hustle, and Silver Linings Playbook.

Forbes reports that between The Hunger Games and X-Men, $1.4 billion has been grossed. The magazine goes on to say this number will grow significantly with the release of the final installments.

The Huffington Post reports that Lawrence made the list last year but only took in a gross of $700 million. In 2013, Dwayne Johnson took the number one spot with $1.3 billion.

Among others on the list this year were actors including Guardians of the Galaxy star Chris Pratt at number two, Scarlett Johansson and Mark Wahlberg. 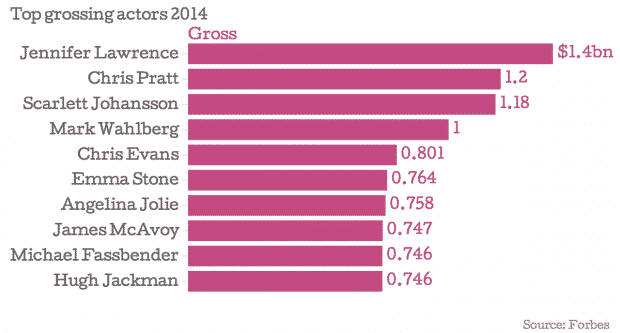