Theatrical Surprises, Stunning Special Effects and Outstanding Talent Will Take Audiences on an Emotional Journey with Anna and Elsa

“Frozen – Live at the Hyperion,” a new musical based on Disney’s animated blockbuster film, will open at the Hyperion Theater at Disney California Adventure Park on May 27, 2016.  Audiences will be immersed in the emotional journey of Anna and Elsa with all of the excitement of live theater, in an entertaining musical adaptation that includes elaborate costumes and sets, stunning special effects, show-stopping production numbers and unique theatrical surprises. 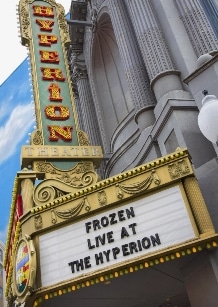 Disney Creative Entertainment, the arm of Walt Disney Imagineering responsible for live theatrical entertainment at Disney Parks, is producing “Frozen – Live at the Hyperion” with all of the creativity and resources of its predecessor “Aladdin – A Musical Spectacular” which ran for a remarkable 13 years, with a total of 14,000 performances to 13 million park guests at the Hyperion Theater.

The 1,873-seat Hyperion is equipped with a backstage facility to support a production of the kind that plays in any venue of that size in the world, as well as the full creativity of Walt Disney Imagineering.

“Frozen – Live at the Hyperion” is based on the Walt Disney Animation Studios’ film “Frozen,” which is the No. 1 animated feature of all time and among the most critically acclaimed animated films. It is the winner of two Academy Awards (2014), for Best Animated Feature and Best Original Song.

“While our production of ‘Frozen‘ will stay true to the heart and soul of the film, we have adapted it for the stage so it’s truly a musical theatre production that befits our beautiful Hyperion Theater,” said Dana Harrel, creative entertainment executive with Walt Disney Imagineering. “The goal of this creative team is to take all audiences – including those that know the film, and those new to these characters­ – on this exciting and touching adventure with Anna and Elsa.

“We know that for many in the audience — adults and children alike – this production will be a first or rare theatergoing experience.  We undertake this responsibility with seriousness as we adapt the film to the stage.”

The new musical features music and lyrics by the creators of the film score, Kristen Anderson-Lopez (“In Transit,” “Up Here”) and Robert Lopez (“Avenue Q,” “The Book of Mormon,” “Up Here”), and is adapted from the screenplay by four-time Tony® nominee Chad Beguelin (“Aladdin – A Musical Spectacular” at Hyperion Theater; Broadway: “Gotta Dance,” “Aladdin,” “The Wedding Singer,” “Elf”).

“Frozen – Live at the Hyperion” is directed by Liesl Tommy, who is currently represented on Broadway with “Eclipsed,” starring Academy Award winner Lupita Nyong’o. The choreographer is Christopher Windom and this is his seventh collaboration with Tommy.  The musical supervisor/arranger/adaptor is Jason Michael Webb, whose Broadway credits include “The Color Purple,” “Motown: The Musical,” “Violet,” and “Memphis.”

A great variety of creative energies has been employed to bring “Frozen – Live at the Hyperion” to the stage.  Harrel and Tommy have assembled a team of creative talent from both Broadway and Walt Disney Imagineering to create this production. The principal designers are Robert Brill (scenery), Clint Ramos (costumes), Charles Lapointe (wigs) David Weiner (lighting), Aaron Rhyne (projections) and Broken Chord (audio).

As the audience anticipates the rise of the curtain, guests will find that the interior of the Hyperion Theater is entirely wrapped, immediately immersing the audience in the world of “Frozen.”  As part of the scenic design, large set elements will move the action in a cinematic way, allowing the production a great forward narrative energy, accompanied by state-of the-art projections that allow the actors to have a greater sense of movement and a sound design that completely envelops the audience in the story.

And of course there will be snow throughout the interior of the theater – on stage and over the audience.

And as would be expected from Walt Disney Imagineering and Disney Parks, new technologies – especially with projections, fabrics and special effects – will delight audiences in new and unique ways.

The challenge of bringing Olaf and the Trolls to the stage has been assigned to master puppet designer Michael Curry, who co-designed with director Julie Taymor the puppets of “The Lion King” on Broadway, the magic mirror in “Snow White” at Fantasyland Theatre, and many other Disney parades, shows and projects, as well as projects for the Olympics, Cirque du Soleil and the Metropolitan Opera.

An entirely separate Broadway production of “Frozen” is currently being prepared by Disney Theatrical Productions and is slated to join Disney Theatrical’s New York productions of “Aladdin” and “The Lion King” for spring 2018 at a theater to be announced. It will have a pre-Broadway engagement starting in summer 2017 in Denver.