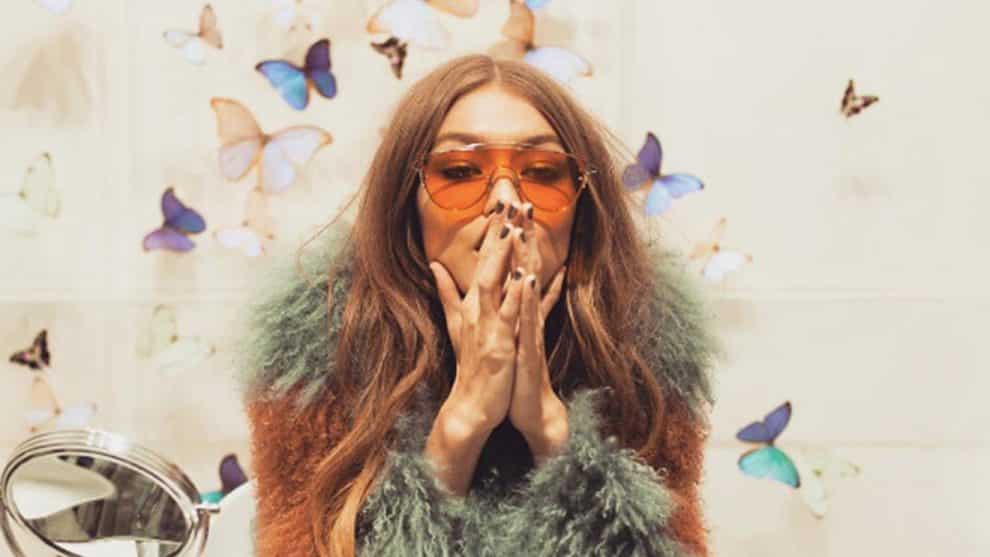 The supermodel and the beauty brand both teased the Gigi x Maybelline collection on social media, but beyond that, details are few. According to 22-year-old Hadid, seen posing behind a colorful array of shadows, pencils, and lipsticks, the collaboration was a “year in the making” and is “coming soon.”

Maybelline, meanwhile, has unveiled a nifty “GH” logo and a split-second shot of what appears to be a creamy rose-hued lipstick.

A dedicated site for the collaboration turns up some additional info. It’ll be released in 13 days (that’s the October 21-22 weekend), and will include a bright coral powder blush stamped with Hadid’s initials. Fans can also sign up to be notified when the collection drops.

It’s also worth noting that Maybelline’s promo video features a peach and blush color scheme — a hint, perhaps, of the packaging to come? The butterflies dangling in the background of Hadid’s photo, which Maybelline also shared, may also hold a clue. The Maybelline video shows the “GH” logo transforming into a shimmering, multicolored foil which echoes the iridescent effect of a butterfly’s wings.

And now that we’ve really fallen down the rabbit hole, please enjoy this photo of Hadid in a butterfly-inspired costume for last year’s Victoria’s Secret Fashion Show.

Of course, a sometimes a butterfly is just a butterfly. Based on the Gigi x Maybelline site, we can at least count on soft peachy and coral hues being involved. Beyond that, we’ll just have to wait and see.