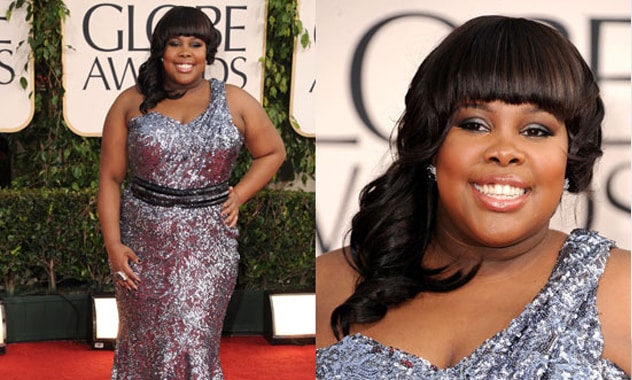 That’s the only word that can sum up the scene tonight on the red carpet as  the TV Academy celebrated Fox’s Glee.

Amber  Riley (Mercedes) fainted and collapsed on the red carpet in the  midst of doing interviews with multiple media outlets before the cast’s panel  presentation. So is she OK?

Thankfully, we are told that Amber is “fine” and was simply “feeling dizzy”  after working all day today on the show.

Soon after the event ended, Amber took to her Twitter account to assure fans  she is OK. “Hey guys, I’m okay 🙂 I got a little dizzy from all the photog  flashes!” she wrote. “You’d think I’s be used to it by now, still a red  carpet amateur I guess. Gonna get checked out but I feel fine. Thank you for all  the concern and well wishes.”

She then added, “I’d also like to thank the photographers for being do  professional and not taking photos of me on the ground. I truly truly appreciate  it. Could have been super embarrassing.”

The Glee cast, and producers, were on hand tonight at the TV Academy  of Arts and Sciences in North Hollywood for a panel discussion held in front of  Emmy voters. Fortunately, Amber was able to participate in the  panel.

We interviewed nearly everyone from the cast tonight, so stand by for more  scoop (and video interviews), tomorrow morning. The series is close to wrapping  up production on its current third season.

We wish Amber all the best and hope she feels better!