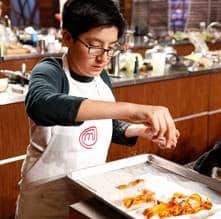 At just 11 years old New York resident, Gonzalo Ingram has accomplished more than many kids his age. Starring as a contestant in MasterChef Junior season 5, Gonzalo has not only evolved his skills in the kitchen but has gained so much insight while working alongside professionals like Chef Gordon Ramsay and Chef Aarón Sánchez. This process didn’t happen overnight, “I tried out for the show four years ago for season two and didn’t get picked but that didn’t stop me, I kept developing my skills”, he said. Gonzalo received an email from his school informing him of auditions for MasterChef season 5, not letting rejection define him he auditioned in New York and nailed it, “I wasn’t expecting to get chosen and when I found out it felt like I was dreaming; the first person that I told was my dad.”

His mother and grandmother ignited his love for cooking when he was merely five years old, and both play an important role in his devotion of food. The first dish that he helped create with his mother was soup, “I was in charge of the vegetables”, he adds.  His favorite ingredient to cook with is seafood and his favorite dish is make is anything involving Peruvian food. Born in Ecuador and then living in Peru for seven years before settling in New York, Peruvian cuisine is extremely important to Gonzalo. In the future he plans to open up a restaurant not only highlighting Peruvian dishes but also International foods as well, “I want people who are visiting America and missing their hometowns to feel like home in my restaurant,” he says. He plans to attend the Culinary Institute of America and if all else fails he is interested in acting, his favorite actor is Leonardo DiCaprio.

Having the opportunity to cook for award-winning chef, TV personality and cookbook author Chef Aarón Sánchez was an incredible experience for him, “he’s an amazing chef and it was great having someone who is also Hispanic on the show.”  Gonzalo has already learned so much while on MasterChef Junior and is proud to be representing the Latino community.

Make sure to tune into MasterChef Junior Thursday nights at 8/7C on FOX to follow Gonzalo’s journey as he works towards making his dreams a reality.