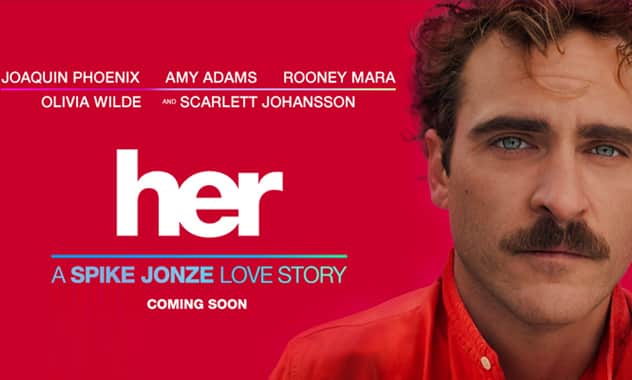 Happy New Year from Warner Bros!  We are excited to share film stills and the second trailer for HER, an original love story that explores the evolving nature—and the risks—of intimacy in the modern world starring Joaquin Phoenix.  HER is currently playing in select theaters in LA, NY and Toronto and will see a wide release on January 10th.  The film is nominated for three Golden Globes including Best Picture, Best Screenplay and Best Actor.

Romantic Drama. Set in Los Angeles, in the near future, “Her” follows Theodore (Joaquin Phoenix), a complex, soulful man who makes his living writing touching, personal letters for other people.  Heartbroken after the end of a long relationship, he becomes intrigued with a new, advanced operating system, which promises to be an intuitive and unique entity in its own right.  Upon initiating it, he is delighted to meet “Samantha,” a bright, female voice (Scarlett Johansson) who is insightful, sensitive and surprisingly funny.  As her needs and desires grow in tandem with his own, their friendship deepens into an eventual love for each other.  From the singular perspective of Oscar®-nominated filmmaker Spike Jonze comes “Her,” an original love story that explores the evolving nature—and the risks—of intimacy in the modern world.

Jennifer Hudson Gives A Wonderful Gift For Her assistant And His Response Wil Make You smile
Wardrobe Issues Ms. Spear? Britney Keeps Show Going As Aide Helps To Put Her Outfit Back On