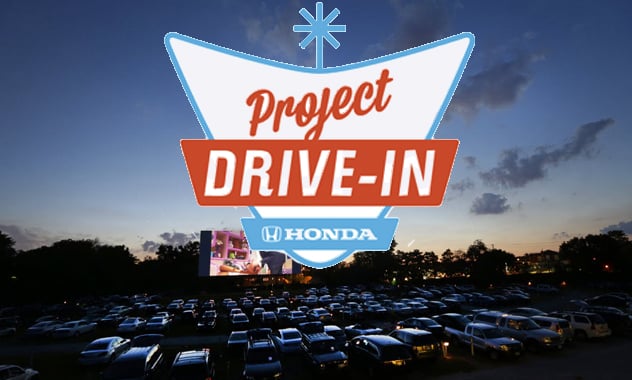 – The end of 35mm film distribution by the close of 2013 could shut down hundreds of drive-in theaters because of the costly switch to digital projection, estimated at $75,000+ per screen. Project Drive-In, a newly launched national effort sponsored by Honda to save as many drive-ins as possible, is raising community awareness across the nation, supplying at least five drive-ins with digital projectors and giving people easy ways to get involved and ensure that this historic part of American cinema and car culture lives on.

At www.projectdrivein.com, people can vote to determine which five drive-in theaters will receive a new digital projector from Honda. Voting began on Aug. 9 and ends on Sept. 9 at 9:00 pm PT. The five winning theaters will be revealed in September, and each will host a celebration that includes a special screening of Sony Pictures Animation’s Cloudy with a Chance of Meatballs 2, in theaters everywhere on September 27.

“Cars and drive-in theaters go hand-in-hand, and it’s our mission to save this decades-old slice of Americana that holds such nostalgia for so many of us,” said Alicia Jones, Manager of Honda & Acura Social Marketing at American Honda Motor Co., Inc. Drive-ins first opened in 1933 to mass popularity and reached their peak after World War II during the 1950s and ’60s when there were more than 4,000 across the country. Jones continued, “We’re committed to helping the remaining drive-in theaters flourish with the move to digital projection.”

The website encourages people to share Project Drive-In with family and friends via social media, pledge to see one movie at their local drive-in and contribute to the Honda Project Drive-In Fund to keep more drive-ins in business. As part of Honda’s fundraising efforts, there will also be an online auction that features tickets to the Los Angeles premiere of Cloudy with a Chance of Meatballs 2 as well as additional film-related merchandise. Honda will launch pop-up drive-ins at Honda dealerships across the country to help raise awareness and build a groundswell of support, featuring a free screening of the first Cloudy with a Chance of Meatballs film.

About Honda Honda offers a complete lineup of cars and trucks through a network of more than 1,000 dealerships in the United States. In 2013, Honda marks 40 years of the Civic model, with more than 30 years of producing automobiles in the region, which began with the Accord in Marysville, Ohio, in November 1982.  Having produced more than 25 million vehicles in North America through 2012 using domestic and globally1 sourced parts, Honda currently operates 14 major manufacturing facilities in North America, producing a wide range of Honda automobiles, all-terrain vehicles, power equipment products, engines and transmissions.

About Cloudy with a Chance of Meatballs 2

Cloudy with a Chance of Meatballs 2″ picks up where Sony Pictures Animation’s mouth-watering comedy left off. Inventor Flint Lockwood thought he saved the world when he destroyed his most infamous invention — a machine that turned water into food causing cheeseburger rain and spaghetti tornadoes. But Flint soon learns that his invention survived and is now creating food-animals – “foodimals!”  Flint and his friends embark on a dangerously delicious mission to battle hungry tacodiles, shrimpanzees, hippotatomuses, cheespiders and other foodimals to save the world – again!  Directed by Cody Cameron and Kris Pearn.  Screenplay by Erica Rivinoja and John Francis Daley & Jonathan Goldstein.  Story by Phil Lord & Christopher Miller and Erica Rivinoja.  Inspired by the book Cloudy with a Chance of Meatballs written by Judi Barrett and illustrated by Ron Barrett.  Produced by Pam Marsden and Kirk Bodyfelt.