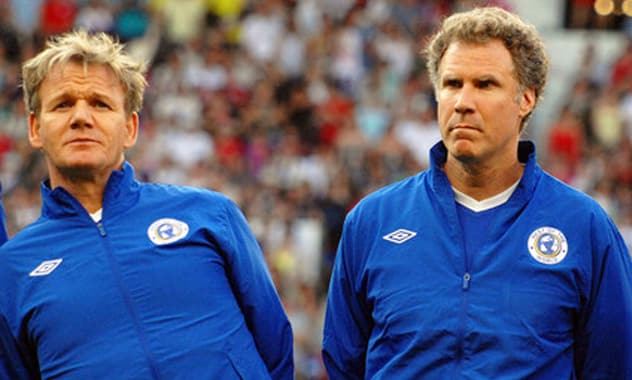 Talk about giving ’til it hurts!

Celebrity chef Gordon Ramsay and actor Will Ferrell both paid a heavy  price for appearing in a U.K. celebrity soccer match for UNICEF, when both were  forced from the game by injury.

They’ll reportedly be OK, but which of them was taken off on a stretcher?

Chef Ramsay was the unlucky star who had to be given oxygen on the field and  was carted off to the hospital after a collision with former All England forward  Teddy Sheringham, who was clearly taking the game too seriously.

We’re sure the famously profane Hell’s Kitchen star had an  unprintable comment, but we’ll just leave that to your imagination.

A more genteel spokesperson for Ramsay told the U.K.’s Daily Mirror, “Gordon was taken to hospital after  injuring his back during the game. He was released after receiving treatment and  although he’s in pain today, there shouldn’t be any long term damage.”

Faring only slightly better, funnyman Ferrell limped off near the end of the  game, reportedly in a lot of pain.