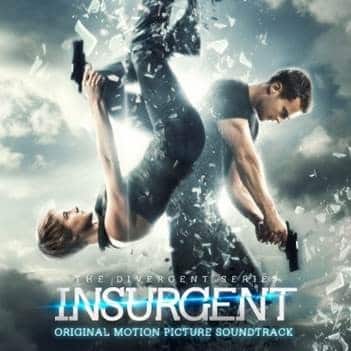 March 2, 2015 — Santa Monica, CA — Interscope Records will partner with Summit Entertainment, a LIONSGATE® (NYSE: LGF) company, to release the Original Motion Picture Soundtrack to the futuristic action-adventure film The Divergent Series: Insurgent.   Insurgent: Original Motion Picture Soundtrack will be released digitally on March 17, 2015 and features a brand-new song by M83 with HAIM, titled “Holes in the Sky.”  MTV.com is premiering the track today.  Listen to it HERE.

The Divergent Series: Insurgent, the second installment of the Divergent franchise, will be released worldwide in both 3D and 2D on March 20, 2015 through Lionsgate’s Summit Entertainment label.   The film is based on the bestselling novel Insurgent by Veronica Roth.

“Director Robert Schwentke brought incredible nuance to the making of INSURGENT and pressed us to the frontiers of musical ingenuity,” said music supervisor Randall Poster.  “There is a varied and powerful collection of songs gathered on this soundtrack. Not a group of songs for the meek but new anthems for the courageous. Music to fuel your insurgency, for sure. ”

The Divergent Series: Insurgent raises the stakes for Tris as she searches for allies and answers in the ruins of a futuristic Chicago. Tris (Woodley) and Four (James) are now fugitives on the run, hunted by Jeanine (Winslet), the leader of the power-hungry Erudite elite.  Racing against time, they must find out what Tris’s family sacrificed their lives to protect, and why the Erudite leaders will do anything to stop them.  Haunted by her past choices but desperate to protect the ones she loves, Tris, with Four at her side, faces one impossible challenge after another as they unlock the truth about the past and ultimately the future of their world.

For more about The Divergent Series: Insurgent, visit:
http://www.thedivergentseries.com
https://www.facebook.com/TheDivergentSeries