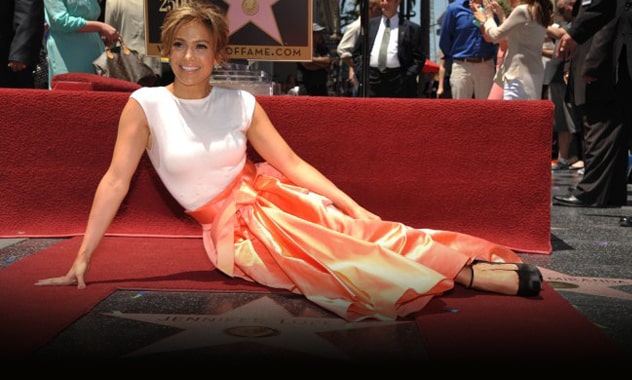 The Hollywood Chamber of Commerce is thrilled to announce that Jennifer Lopez will be honored with a commemorative star on the Hollywood Walk of Fame Today, June 20, 2013 at 11:30 a.m. “In 1994, Sophia Loren became the recipient of the 2,000th star on the Walk of Fame,” stated Ana Martinez, producer of the Walk of Fame ceremonies. “This ceremony marks the 2,500th star on our famous Walk and Jennifer Lopez was the obvious choice! Fans from across the world will be thrilled to experience this special star ceremony.”

Emcee Leron Gubler, President & CEO of the Hollywood Chamber of Commerce and guest speakers, to be announced, will help Lopez unveil the 2,500th Star in the Category of Recording at 6262 Hollywood Boulevard in front of W Hollywood Hotel as fans around the world watch the live-streaming exclusively on www.walkoffame.com.

The star will bear a brass dedication to mark the special occasion.

Actress, entertainer, music artist, film & TV producer, fashion designer, entrepreneur and humanitarian, Jennifer Lopez is considered as one of the most powerful and celebrated celebrities in entertainment industry.

Forbes Magazine named her the No. 1 Most Powerful Celebrity in the World in 2012. With an unmatched global appeal, Lopez has racked up more than $1.4-billion in worldwide box office receipts. She is an award-winning TV personality through participation on American Idol, the No. 1 Most Watched U.S. Television series of 2010 – 2012.

Lopez has transformed the global music scene. She has sold more than 70-million records worldwide and starred in multiple box-office No. 1 films, including “Monster-In-Law” and “The Wedding Planner.” In 2001, “The Wedding Planner” was the nation’s top-grossing film, while her album, “J.Lo,” was No. 1 on the Billboard Top 200 Chart. The two simultaneous No. 1 honors, in music and film, made Lopez the first woman in history to have a No. 1 movie and No. 1 album in the same week.

Her celebrated history of 11 years of music has been documented by the release of “Dance Again…The Great Hits,” an album collection of charted singles over the last decade. JLO is set to release a new studio album thisfall. The music video of the new single, “Live It Up” has already been viewed over 24 million views alone. The single features Pitbull and is produced by RedOne, through his label, 2101 Records/ Capitol Records.

In May 2011, “On The Floor,” produced by RedOne and also featuring Pitbull, became a world-wide phenomenon. This song shot to No. 1 in 18 countries and became the most downloaded song of her career. The music video set an all-time record making Jennifer the first female artist on Vevo to rack up 100-million views in the shortest amount of time. And, the music video is THE most-watched music video by any female artist in the history of YouTube, with views exceeding 673-million.

An acclaimed actress, Lopez was recently seen co-starring opposite Jason Stratham in an adaptation of the crime/thriller literary series “Parker,” directed by Taylor Hackford. She made her feature film debut in the highly-acclaimed “Mi Familia,” which garnered her an Independent Spirit Award-nomination for her role as the young mother Maria Sanchez. Lopez earned widespread acclaim for her work in the title role of “Selena,” which brought her a Golden Globe Award-nomination. In 2002, Lopez was awarded ShoWest Female Star of the Year, and in 2006, Lopez received the Women in Film’s Crystal Award. Additionally, the National Council of La Raza, the largest Latino advocacy group in the nation, named her Entertainer of the Year at the American Latino Media Arts (ALMA) Awards.

Her film credits include Lasse Hallström’s “An Unfinished Life,” with Robert Redford and Morgan Freeman; Oliver Stone’s “U-Turn;” “Maid In Manhattan;” “Money Train;” Francis Ford Coppola’s “Jack” with Robin Williams; “Blood and Wine” opposite Jack Nicholson; Luis Mandoki’s “Angel Eyes;” “The Cell;” Steven Soderbergh’s “Out of Sight” with George Clooney; Michael Apted’s “Enough;” and “Anaconda.” Playing the role of actress and producer, she starred in the feature films “El Cantante,” a drama about the life of salsa legend Hector Lavoe, and “Bordertown” opposite Antonio Banderas. In 2011, Lopez starred in the romantic comedy “The Back-up Plan.”

In 2012, Lopez was a part of the ensemble cast in “What To Expect When You’re Expecting.” She lent her voice to the character of Shira, a sabre-toothed tiger, in the animated film “Ice Age 4: Continental Drift,” which was a No. 1 box-office hit.

Nuyorican is Lopez’s TV & Film production arm of her global enterprise. She is executive producer of the new critically acclaimed series, The Fosters, produced through Nuyorican. The original series for ABC Family is a compelling, one-hour drama about a multi-ethnic family mix of foster and biological kids being raised by two moms. In addition to gay marriage and parenting, the groundbreaking and thematically diverse series addresses the foster care system, mixed race families and teen issues.

Lopez’s business acumen has extended her brand to new exciting groundbreaking platforms. Lopez has formed a partnership with NuvoTV as Chief Creative Officer for the cable network. The network is the first-ever English speaking Modern Latino experience on television. Lopez oversees the creative and programming for NuvoTV.

Lopez has launched an unprecedented tele-com initiative, Viva Movil. Teaming in a new partnership with Verizon Wireless, the venture has launched a new mobile brand, including retails stores, aimed at the fast-growing Latino population in the U.S. Viva Movil by Jennifer Lopez, has begun to sell smartphones, tablets and Verizon wireless plans on www.vivamovil.com and through a special agreement with Facebook.

Lopez set the branding standard for celebrity fragrance, apparel and accessories. JLove will be her 18th fragrance, launching Oct 1, 2013. The celebrity brand collection is the most successful in history taking in more than $2-billion. In 2011, Kohl’s department stores launched the most successful celebrity apparel, accessories and home products brand in the company’s history, Jennifer Lopez Collection for Kohl’s.

Known for her beauty and fashion sense, Lopez has been the face of many advertising campaigns such as L’Oreal,  Louis Vuitton, and Gillette.

Lopez’s dedication to assisting children in need and to the empowerment of others is far-reaching. The Girls & Boys Club of America has named her their national spokeswoman. Gucci featured Lopez in a national advertising campaign along with her twins Emme and Max, launching its children collection. The campaign raised over $1.5 million to benefit UNICEF.

Her commitment to making a difference is highlighted through her work with woman and children via The Lopez Family Foundation, a not-for-profit she started with her sister, Lynda. The Lopez Family Foundation is dedicated to improving the health and well-being of women and children, and raising the level of medical care available to them. The Foundation is currently working with Children’s Hospital Los Angeles on a telemedicine program that will help underserved communities around the world to be treated with state-of-the-art technology and by top doctors. The organization opened its first telemedicine center in Puerto Rico in 2010 and seven new centers in Panama in 2012.

For more information and to view who shares a star on the Hollywood Walk of Fame, visit www.walkoffame.com