Of all the many strong female performances on HBO’s “Big Love,” Mireille Enos‘s often stood out because it came in two parts. As the actress playing both identical Marquart twins, Enos got to alternately play sweet, open-hearted Kathy and cool, reserved Jodeen.

It was a performance that caught the eye of the “Big Love” casting directors, who were responsible for finding a strong actress to work at the center of “The Killing,” AMC’s new drama (debuting Sunday night at 9) tracking a single murder investigation over an entire season. Enos plays Sarah Linden, a Seattle cop caught up in the biggest case of her career on what’s supposed to be her final days on the job.

It’s a very quiet performance – Linden thinks a lot and tends to speak only when necessary – but a compelling one. I spoke with Enos about the part at the television critics press tour back in January.

Have you played a cop before?

I have not played a cop before. Is that true?  I’m trying to think back to my  episodic guest-star stuff if I’ve ever played a cop. I don’t believe so.

And even if you did, it wouldn’t have been a big enough part where you would require research or anything.

So what did you do to prep?

Well, I was 4 months pregnant when I shot the pilot. So normally I’m a person who loves research and would have thrown myself into cop cars.  But because I was pregnant I didn’t want to do any of that. But on the setm the man for the pilot who was doing all of our still photography, he had been a homicide detective for 20 years. So I just bent his ear basically for a month about procedure and the cases he was on and where the gun should sit on my hip.  And he just talked and talked and talked and talked at me.  And then (showrunner) Veena (Sud) has spent a lot of time with cops, and so she would talk to me about it too.  And then I just tried to think about Sarah’s job as a cop like any job, you know?  It’s a job that person is good at, and you show up, and there’s boring parts and there’s exciting parts and that was that.

We all have our impressions of the profession and cop culture.  What  misconceptions did you have, or what are some of the things you learned along the way that were perhaps surprising to you?  About the job or the mindset?

I don’t know if there was anything that was surprising to me. There’s probably a lot more downtime than people expect or that gets put into films.  And there’s a lot of really boring work that goes into it.  I don’t know that there’s been anything that’s been really surprising to me.  I think the big challenge has been to not allow myself to fall into a cop stereotype. To not like try to put on any kind of like tough-y-ness.  To just like be who I am and, you know, I’m 5’2” and whatever, and there are cops who are (that small). And she’s a detective, so she is a strong human being but she’s using her mind more than any kind of brawn.  And just to walk the line between strength and intellect and vulnerability and knowing that all of those things are acceptable.

I’m wondering if there’s any sort of scene or moment in the pilot script that made you say, “All right, I want to play this character”?

Well, the pilot script landed in my lap and it was the most beautiful thing I had read in any genre in years.  It was so filmic.  Veena’s style, the way she paces is just an actress’s dream.  Yeah, a total dream to get to play something so slowly.  Let a story unfold in that way.  I wanted it so badly, yeah.

(laughs) No one.  I was really lucky the casting directors for this were the same casting directors for “Big Love,” so they knew me and we had a nice relationship, so they thought to bring me in for it and then it was a long process.  They needed to see basically every actor in the world because it’s a big part and so I went in twice.  And then there was long gap where they were seeing lots of other people and then they brought me back in and then…

Do you remember what scene you initially had to read (for the audition)?

The first time, they said, “Choose 2 scenes.” And actually it always makes me really nervous when they have me choose.  I just want them to tell me what they want me to do because then there’s a little part of me that’s like, “Did I choose badly?”  So I actually prepared 3 just to cover my bases.  One of the scenes I did never made it into the pilot. And then one of them was the scene with my son. And then the third was kind of a strange choice.  It was a scene in the fields, and it was a little bit random, but I felt there was character detail in there. And the second time I came in they had me do those 3 and then they added 2 more. So by the end I had pretty much done the whole pilot in that audition.

So when you have a scene where it’s just Sarah’s looking around, she’s looking at the field, she’s thinking, what are you doing?

Well, you’ve had to experience this idea of playing against nothing, you know,  when Kathy and Jodeen were together.

So fun.  Really exciting.  On one day to play 2 different people. It was especially exciting because they let me run with it.  Kathy, I kind of had an instinct about right away.  She was more clearly defined.  And then they called and said, “We want you to play this other part.”  And I asked, “Who is that person?”  And they didn’t know yet.  So they let me bring in kind of my own ideas and figured it out as I went.

But on those occasions when it’s the sisters talking to each other, are you playing against the screen? Against a stand-in?

Yeah, against a stand-in.  They had a double for each character and that person, and then I’d just play a scene with another person.

Did you prefer one hairstyle over the other?

Talk to me a little bit about  your character’s relationship with Holder (the rookie detective who works the case with Linden, played by Joel Kinnaman), because it seems she has very little use for him at the start.

Yeah.  It’s a great relationship because they have an instant dislike of one another, and yet there are things about their different styles that both have to admit are very effective.  And so they end up respecting each other in spite of themselves.  And it’s fun finding those moments where he makes me crazy, but what he did was actually really useful.

In some ways, you’re carrying the show and that must be a big burden…

I don’t feel like I’m carrying the show at all.

Everything is an ensemble, especially the way this show is written and the group of actors. Yeah, I am just one of the players.

Okay, so we’ll take that idea out of the equation, but I was using it to ramp up to saying that in some ways you have one of the easier jobs.  Like, Billy (Campbell, who plays one of the prime suspects) has to play a character without ever knowing what he’s really done and what he hasn’t.  And you just get to go straight ahead.

Yes, that’s right. I think a lot of the other actors have harder jobs than I do.  I mean, the emotional requirement of the family members, Brent (Sexton) and Michelle (Forbes) are doing such incredible heart-breaking work (as the victim’s parents).   And there’s the political storyline.  It’s hard to get all that political language and allow it to be alive and fresh and not feel like a separate part of the story, to feel like it’s all tangled in. And I just feel like the script is just kind of carrying me along.

What you’re doing, it’s a very minimalist performance, because she’s just no-nonsense. And minimalism can in the wrong hands be boring.  So how do you make her spare and yet interesting?

It’s about point of view.  She has to have an opinion about everything that happens.  And as long as my opinion and points of view are really clear, then it’s not flat.  It’s just credit. 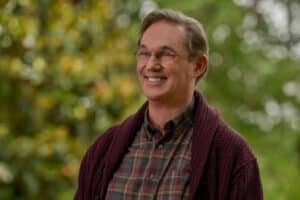 Richard Thomas on his Career-Defining Role on The Waltons, Returning as Narrator, and the Importance of Gratitude 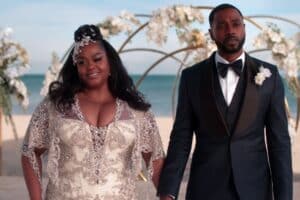 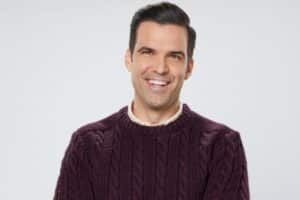 Benjamin Ayres on Why We Love Christmas Movies, Filming Them in