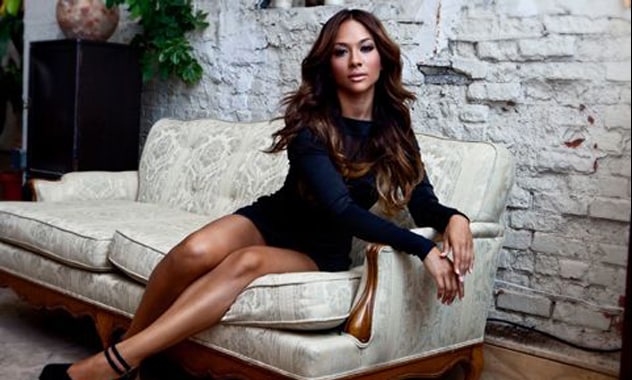 Meet Lea Quezada, the first female artist of 50 Cent’s G-Note Records. Look familiar? She started out in the industry singing on Lil Flip’s “Sunshine” track in 2004, before getting pushed back into the working world. Now, this Puerto-Rican and Dominican singer is ready to prove she’s got the goods to stay in the music game.

Can you tell me a bit about your background and family?

“I was raised in Queens, mostly by my single mother. My father was very much involved in my life. He was very much into music, and performed a lot at parties as a DJ. He would take me and I started singing and performing and getting into it. When I was starting out, it was the 80s. So [I was listening to] a lot of that music, but also a lot of Spanish music. My dad would just perform wherever he could, and he now does karaoke!” (laughs)

How would you describe your sound?

“I’m influenced by a lot of different genres. From jazz to R&B to pop. My dad had a huge record collection growing up and I would listen to everything. [My sound] has become a fusion of everything that I love.”

“Mariah Cary has always been an influence. She really changed the game when she started out. There was no one like her. I’m currently really into Beyonce and Rihanna. I like [Rihanna] a lot, [though] I’m not as edgy as she is. I’m definitely influenced by her sound and beats.”

How did you come to get signed with G-Note?

“I came out on ‘Sunshine’ in 2004. I was doing anything and traveling and meeting all these celebrities and after that kind of calmed down, I had to come back home and work again as a waitress. Nothing ever happened. It felt like I was completely over. I was defeated and even stopped doing music because I felt very discouraged. I got a job in a club, and this rep found me working there. They wanted me to work on a project for Hot Rod [a G-Note rapper]. So I did and ended up meeting with everyone and talking more and more. Then I met [50 Cent] at an event, and he told me he liked what I had done and I then signed [to the label]. I saw it as a sign from God, at that point. It really came out of nowhere.”

What projects are you working on now?

“Right now I’m really just working on an album and trying to connect more with fans, [especially] on the internet. That’s where fans really get to reach out, that’s where everything is.”

Who would you love to work with?

“Everyone, every single person. (laughs) Honestly, there are so many people. I really love Ryan Tedder [of band One Republic]. I love his songwriting and playing, he’s definitely someone I’d love to collaborate with.”

You did a cover of Selena’s “Dreaming of You” – what Latin artists have played a role in your music or life?

“I grew up listening to a lot of Marc Anthony. He literally gives me chills when he sings. Also, randomly, my father listened to a lot of Camilo Sesto. I often took and performed his songs growing up. Also La India and Huey Dunbar from DLG (Dark Latin Groove).”

What performer’s career would you love to emulate?

“Beyonce’s career. She’s so poised, so sophisticated, and still really young. She’s just so involved in her own career and really seems to make the right decisions for herself as an artist.”

Are you open to other projects besides music?

“Sure I’d love to do something like that. I workout six days a week, so in the future, maybe a fitness line or something like that. Right now, I’m really focused on my music and serving as a youth ambassador for the Latino Commission on AIDS. I think AIDS in the Latino community is something that should be taken seriously. I feel like [the issue] has been forgotten a little bit and I want to shed some some light on it for others.”

Exclusive: Listen to Lea’s cover of “Dreaming of You” and let us know what you think!

Def Leppard On ‘Rock Of Ages’: Tom Cruise Is A ‘Good’ Singer, Totally Fine With Movie
Tito ‘El Bambino’ Welcomes His First Son Into The World