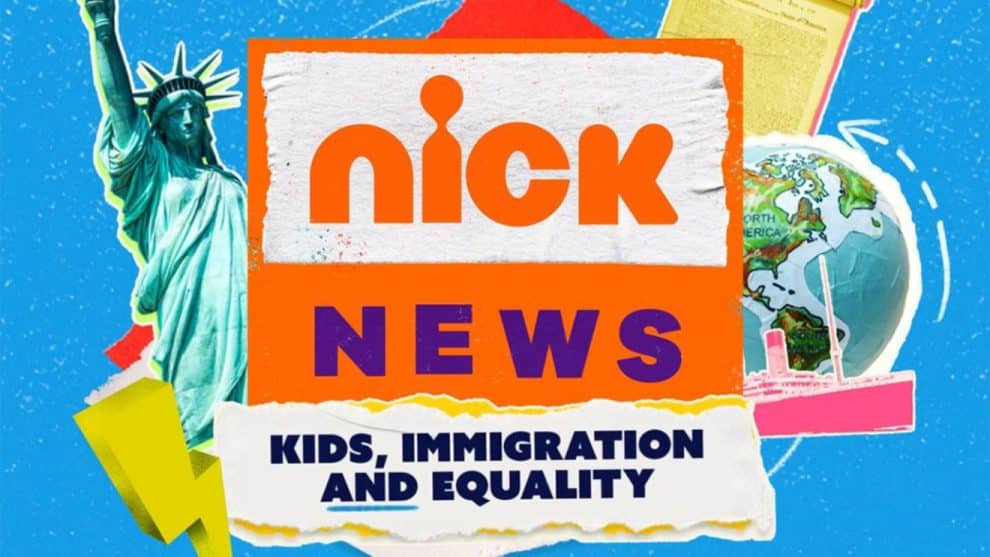 HOLLYWOOD, Calif.–June, 2021–Nickelodeon will debut a brand-new installment of its renowned Nick News series, Nick News: Kids, Immigration and Equality, on Thursday, June 17, at 7:30 p.m. (ET/PT).  Featuring appearances by J Balvin, Samantha Bee, Padma Lakshmi, Nancy Pelosi and Ben Simmons, among others, the special delves into some of the compelling stories of young people and families whose determination and perseverance in search of a better life represent the ideals that have shaped America into a diverse and dynamic country.

“Every immigrant’s story is individual, and yet in the U.S, it is a collective experience many can relate to. In fact, over 25% of kids in the U.S. under the age of 18 have a parent or grandparent that is an immigrant,” said Magalie Laguerre-Wilkinson, Vice President of News Programming, Nickelodeon and Executive Producer of Nick News. “As we take time to acknowledge the many contributions immigrants have made to the United States,Nick News: Kids, Immigration and Equality aims to platform the stories of these remarkable individuals and families to highlight our shared history and showcase that despite our perceived differences we are more alike than different.”

Nick News: Kids, Immigration and Equality begins with the story of early immigration in America, detailing the hope for a better life that drove many families to permanently settle in the U.S. The episode also delves into current immigration topicsexplaining who “Dreamers” are and what the Deferred Action for Childhood Arrivals (DACA) is.  The segment focuses on the powerful stories of three young community advocates, Luz Chavez-Gonzales of Gaithersburg, Md., Kamau Chege of Seattle, Wash., and Estefany Pineda of East Boston, Mass., who have persevered in search of ‘The American Dream.’

Enrique Acevedo, 60 Minutes+ correspondent, will also take viewers to Hazleton, Pa., a town that over 100 years ago welcomed the European immigrants that fueled its coal mining industry and then faced challenges when some members of the community took issue with and sought to stop Latino immigrants moving to the areain the late 1990s.  However, Joe Maddon Jr., Manager of the Los Angeles Angels, a Hazleton native, sought to turn the page on the divisiveness that overtook his community and help his town heal through the creation of the Hazleton Integration Project (HIP), a community-based center that aims to unite the multicultural residents of Hazleton by offering a myriad of programs, including English as a second language, a series of virtual STEM afterschool classes, sports programs and many others.  The organization’s programs are highlighted through the stories of five kids whose families have emigrated to Hazleton from the Dominican Republic and who have found much needed resources and a sense of community at HIP.

Additional segments include: a mention about former President George W. Bush’s new book, “Out of Many, One: Portraits of America’s Immigrants,” which is a collection of 43 portraits of immigrants painted by Bush. It highlights the inspiring journeys of America’s immigrants and their contributions to THIS nation;  and Time for Kids reporter, Rory Hu is back and tests viewers’knowledge of civics with questions that all immigrants must answer when taking the test to become a United States citizen.The Speaker of the United States House of Representatives,Nancy Pelosi, chimes in to answer the question ‘Who would assume control of the country if the President and Vice Presidentof the United States are unable to serve?’

Following the premiere on Nickelodeon, Nick News: Kids Immigration and Equality will be available on Nick.com, Nick App and Nick On Demand beginning June 18 and on the Nickelodeon YouTube channel on June 22.

Nickelodeon’s Nick News has won 10 Emmys, a Peabody, a Columbia DuPont, and the prestigious Edward R. Murrow award for Journalistic Excellence, the first and only time it was given to a children’s program.  The show originally aired for 25 years, ending with the retirement of creator and original host Linda Ellerbee in 2016. Created with a core ethos of respecting its kid audience, the show explained world events in a direct way, especially the tough stuff—including 9/11, The Iraqi Invasion, politics, HIV-AIDS and Hurricane Katrina— and always ensured kids were given a platform to voice their opinions and a safe place to question their world. Nick News made its return last June with a special hour-long presentation Kids, Race and Unity: A Nick News Special, hosted by global superstar Alicia Keys, followed by Nick News: Kids Pick the President, hosted by entertainment powerhouse Keke Palmer, which aired in November. Nick News is executive produced by Magalie Laguerre-Wilkinson, Vice President of News Programming, Nickelodeon and Executive Producer of Nick News.

Nickelodeon, now in its 42nd year, is the number-one entertainment brand for kids. It has built a diverse, global business by putting kids first in everything it does. The brand includes television programming and production in the United States and around the world, plus consumer products, digital, location-based experiences, publishing and feature films. For more information or artwork, visit www.nickpress.com. Nickelodeon and all related titles, characters and logos are trademarks of ViacomCBS Inc. (Nasdaq: VIACA, VIAC).