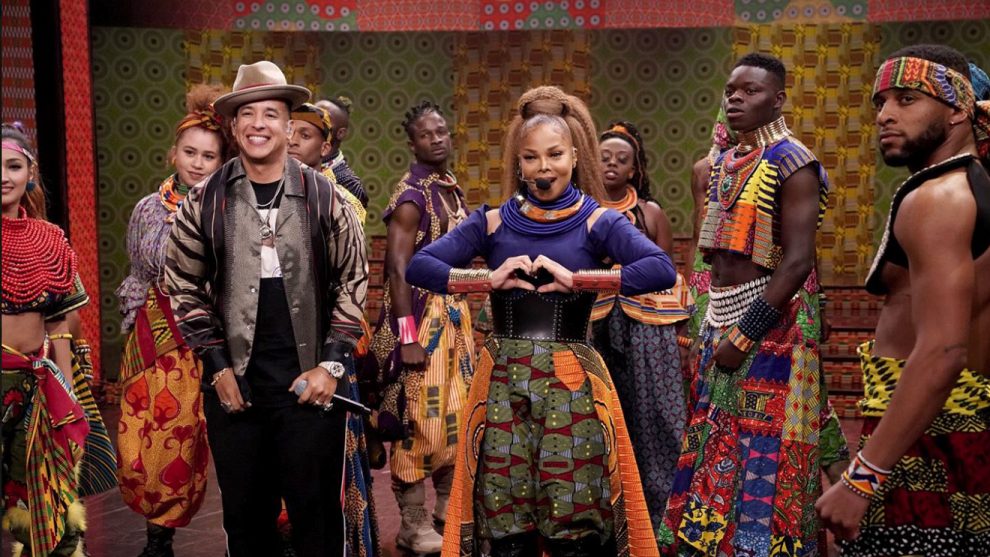 Janet Jackson delivered her debut performance of new single “Made for Now” with Daddy Yankee Friday night on The Tonight Show with Jimmy Fallon, the singer’s first late-night appearance in 14 years.

Jackson and Yankee turned the Tonight Show studio into their own personal music video shoot with elaborate set pieces to accommodate over a dozen dancers, drummers enmeshed in the audience and handheld camerawork.

Like the actual music video, Jackson’s “Made for Now” performance was a celebratory dance party featuring an international dance crew that hail from Ghana, Nigeria, Grenada, Trinidad and the U.S.

Jackson and Yankee will next bring “Made for Now” to Harlem Week’s dance party on Saturday, Jackson tweeted following the Tonight Show visit, which marked her first late-night U.S. appearance since stopping by David Letterman’s Late Show in 2004.

In an interview Thursday with iHeartRadio, Jackson talked about “Made for Now,” her first new song in three years. “I’ve always loved Latin music, and obviously, the African music is there and always been an influence. Coming from what Daddy Yankee does in reggaeton, it’s inspiration. It’s reggae music, which brings you back to the African vibe, the whole bit. It was really nice working with him,” Jackson said.

“Growing up with different bodies of music [and] having so many kids in the family, I’ve been fortunate enough to have an eclectic library of music. [I’m] just doing something different that once again has been a love of mine, but still trying to do different things.”

Jackson also opened up about the death of Aretha Franklin, who was close to the Jackson family after they moved to Detroit and signed with Motown.

“She lived down the street from my family and her kids used to come over to our house to play and we’d go to hers,” Jackson said. “I remember her with the red hair, the shoulder length hair, and her answering the door and this one day, in particular, I don’t know why and she had on a white midriff and a white skirt and she opened the door and there she was, Ms. Aretha Franklin. It’s sad, you know? She’s still here with us. Her music will live on forever and what a voice and a great body of work. She inspired so many people and will continue to inspire generations to come.”