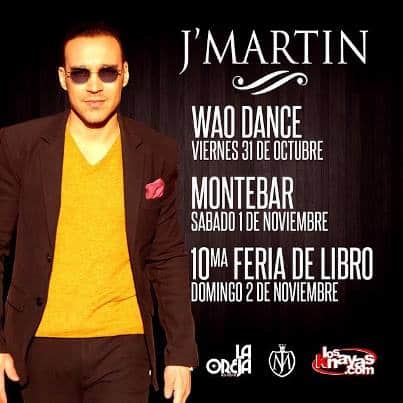 Bachata artist and singer-songwriter, J’Martin, announces his Dominican Republic tour, news his fans have been anxiously awaiting.  The visit will include a media promotional tour and performances in various cities and events.

J’Martin will be arriving in Dominican Republic in the midst of his success with single “Ni Una Lagrima Más”, which has been a recurrent hit in radio stations across the U.S. and in several countries in Central America and the Caribbean, including his native country, Dominican Republic.

He has a total of three shows in three cities staring on Friday October 31st at Wao Dance in Santo Domingo, Saturday November 1st at Montebar in Santiago, and Sunday November 2nd at Bani’s Book Fair.

In mid-November, J’Martin will continue touring and promoting his single in Costa Rica, El Salvador and Guatemala.

J’Martin, born in New York City and raised in the Dominican Republic, emerged as one of the most promising artists in the Latin recording industry today.  He is also one of the most versatile performers within Urban Bachata and a successful entrepreneur. His name and recognition have gone beyond his 20+ year business career. His philanthropic work is notable and in addition, he has been appointed as a spokesperson for a broad number of charities throughout New York and the Dominican Republic