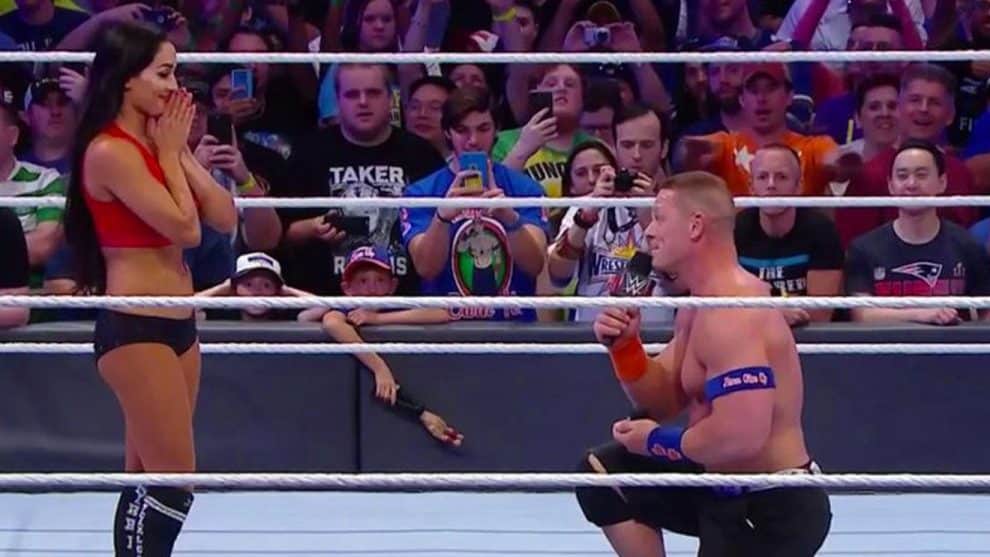 WWE Superstar John Cena went into the ring armed with another ring on Sunday night at WrestleMania 33.

After beating The Miz and Maryse in a couple’s match, the “Trainwreck” actor dropped down on one knee and proposed to WWE Diva Nikki Bella.

This is why I love @WWE
CONGRATULATIONS @JohnCena & @BellaTwins Nikki pic.twitter.com/WFO5V3ZpAu

“This is what you wanted a year ago … you broke your neck and did everything you could to get back. I was so very proud,” Cena told his longtime girlfriend, referring to her injury last year.

“Before you went into surgery, I told you there’d be a time when you were a little bit loopy and I could ask you anything I wanted and you wouldn’t remember,” he teased her. “Well, the time is right” to reveal what he asked, the wrestler said.

Cena then pulled out a WWE-sized rock and asked Nikki to marry him — as the 70,000-strong audience at the Camping World Arena in Orlando, Florida, exploded in “awwwwws.”

Thankfully, considering how many people were watching the romantic moment live and on TV, Nikki said yes.

Cena was gushing over Bella when talking to reporters the day before at the WWE Make a Wish event, saying: “Nicole is the strongest and most inspiring person I have ever met and that is why I love her. This moment tomorrow to me is the most important of all because I get to stand alongside the person I am in love with. This is the one that I will remember,” he said.

“Everyone always asks me, ‘What is your favorite match?’ and I tell them, ‘It’s the next one.’ When you ask me after Sunday, my answer will be ‘the second I got to stand in a WrestleMania ring alongside Nicole and beat somebody,’” Cena continued.

“All of that is because of her story — she drives me, she inspires me. We learn from each other every day, it’s amazing the stuff that you guys don’t see that happens. On top of that, I am head over heels for her, and she loves this business as much as I do. For both of us to be in there, it’s special,” he added.

For anyone who didn’t get teary-eyed at that, you have a heart of stone.

Cena and Bella (whose real name is Stephanie Nicole Garcia-Colace) have been dating since May 2014. She was previously in a relationship with fellow WWE Superstar Dolph Ziggler.