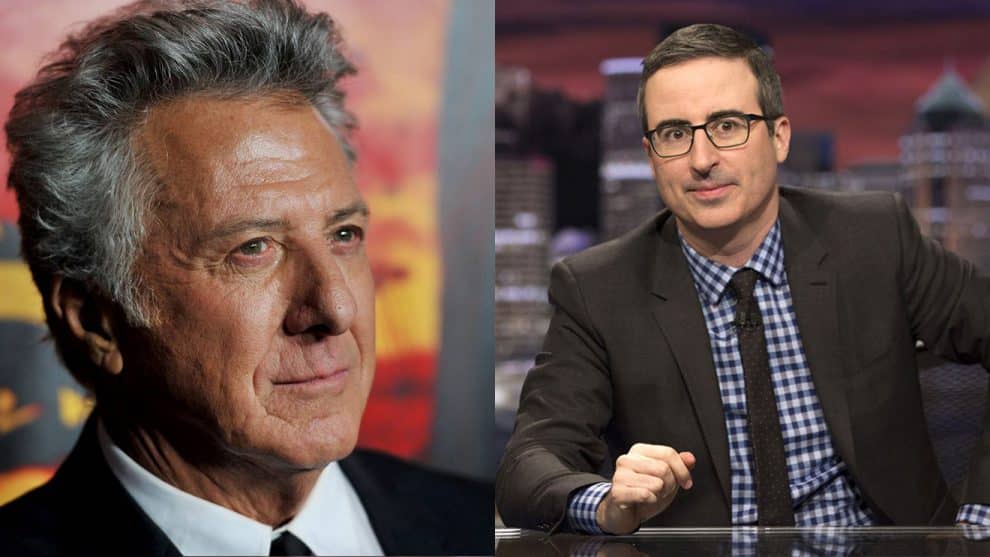 John Oliver got into a testy argument with Dustin Hoffman over sexual harassment allegations against the Oscar-winning actor at a film panel in New York on Monday night.

At a 20th anniversary panel and screening of the political film Wag the Dog, Oliver asked Hoffman about recent sexual harassment allegations made against him by Anna Graham Hunter while she was a 17-year-old production assistant on the 1985 TV film Death of a Salesman. According to The Washington Post’s Steve Zeitchik, who tweeted about the back-and-forth as it happened and later posted a full story and video of what transpired, Hoffman “grew visibly uncomfortable.”

The Last Week Tonight host broached the subject approximately halfway through the hour-long pre-screening discussion, according to Zeitchik’s story.

“This is something we’re going to have to talk about because … it’s hanging in the air,” Oliver said to Hoffman at the discussion, according to the Post.

“It’s hanging in the air?” Hoffman said. “From a few things you’ve read you’ve made an incredible assumption about me,” he noted, adding sarcastically, “You’ve made the case better than anyone else can. I’m guilty.”

Oliver, in particular, seized on Hoffman’s apology after The Hollywood Reporter revealed the allegations against the actor.

When contacted by THR, Hoffman said, “I have the utmost respect for women and feel terrible that anything I might have done could have put her in an uncomfortable situation. I am sorry. It is not reflective of who I am.”

“It’s ‘not reflective of who I am’ — it’s that kind of response to this stuff that pisses me off,” Oliver said during the panel discussion, according to the Post. “It is reflective of who you were. If you’ve given no evidence to show it didn’t [happen] then there was a period of time for a while when you were a creeper around women. It feels like a cop-out to say ‘it wasn’t me.’ Do you understand how that feels like a dismissal?”

The entire rest of the discussion was dominated by Oliver, Hoffman and the subject of sexual harassment with other panel participants and audience members trying to change the subject, the Post reports, claiming that Oliver himself even tried to move on and talk about the film but Hoffman returned to the harassment claims.

Hoffman said several times on Monday night that he didn’t believe he’d done anything wrong, the Post reported. He said he didn’t recall meeting Graham Hunter, didn’t grope anyone and that what he said was simply how members of “a family” talked to one another, the Post says.

“I still don’t know who this woman is,” Hoffman said. “I never met her; if I met her it was in concert with other people.”

The actor said he felt blindsided because neither Oliver nor Tribeca organizers told him the moderator would raise the subject.

At one point, Hoffman asked Oliver if he believed the reports about him and Oliver said, “Yes, because there’s no point in [an accuser] lying.”

“Well, there’s a point in her not bringing it up for 40 years,” Hoffman said.

Hoffman later said to Oliver, “You weren’t there,” and the Last Week Tonight host replied, “I’m happy I wasn’t,” according to Zeitchik.

Read tweets from Zeitchik and others in attendance below.

All hell has now broken loose on this Wag The Dog panel. The subject seemed over after seven minutes but Hoffman brought it up again, saying Oliver is not keeping an "open mind" and is unquestionably believing accusers, and a testy five minutes followed.

And now the _ audience _ is arguing volubly back and forth about whether Hoffman is upstanding and Oliver should be asking the questions. Not sure I've ever seen anything like it at a screening panel.

Oliver just asked people to stop recording his argument with Hoffman on their phone. "That's what I hate about the Internet." But i mean, isn't that why he brought it up? To have a public conversation?

This photo was taken before #92Y panel discussion got v heated; John Oliver asked Dustin Hoffman about the sexual assault allegations against him… Hoffman denied knowing the woman. pic.twitter.com/xihbNt50fM

“You’ve made this incredible assumption about me, sir.” Hoffman said to Oliver. Oliver says it’s something he had to bring it up before we watch the film #wagthedog

Dustin Hoffman and John Oliver getting into it at Tribeca Film Institute benefit. “What response do you want?” – Hoffman “It doesn’t seem self-reflective in the way the situation demands.” -Oliver