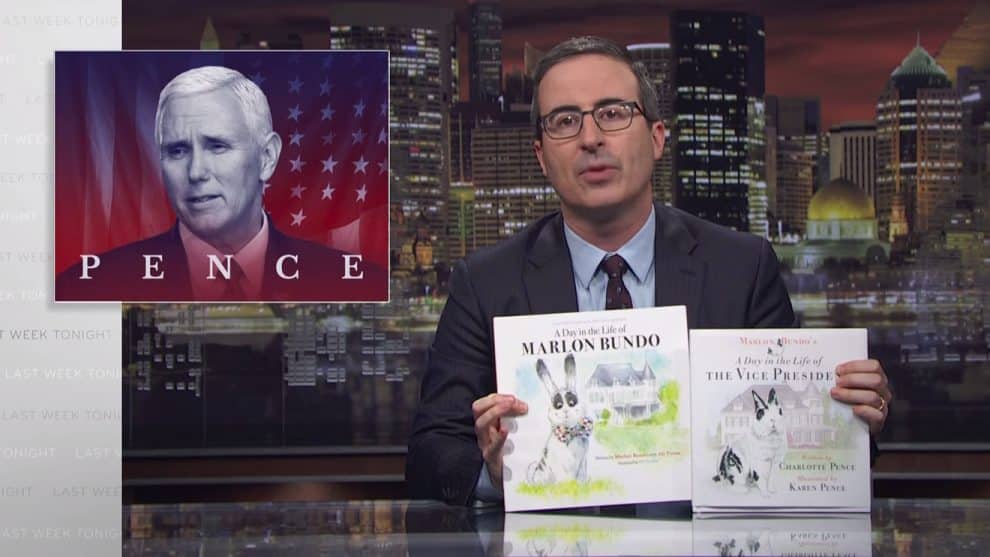 On Monday, Karen and Charlotte Pence, wife and daughter of Vice President Mike Pence, released a children’s book called Marlon Bundo’s Day in the Life of the Vice President, about what it’s like to be the second-in-command from the perspective of the Pence family rabbit, Marlon Bundo.

On his show on Sunday, Oliver announced the release of a parody book presented by Last Week Tonight called, A Day in the Life of Marlon Bundo. This version, written by Jill Twiss and illustrated by EG Keller, focuses on Bundo rather than the Pences. Another twist? The rabbit in Oliver’s version is gay.

In his review of the Pences’ book on Last Week Tonight on Sunday, Oliver was disappointed to discover that the storyline takes Bundo to Focus on the Family in Colorado, an organization that promotes gay-conversion therapy. “Congratulations, Pence, you even managed to ruin Marlon Bundo!” Oliver said, before introducing his show’s own book.

“It turns out,” Oliver said, “in a complete coincidence, we also wrote a book about Mike Pence’s rabbit.”

The sexuality of the rabbit in Oliver’s book is a direct affront to Pence, who has a history of backing policies that don’t support LGBTQ interests. The book also chides Pence himself. “[T]his story isn’t going to be about him because he isn’t very fun,” Bundo says in Oliver’s book. “This story is about me, because I’m very, very fun.”

The Pence family book was published by Regenery Kids. A spokesperson for the publisher said “It’s unfortunate that anyone would feel the need to ridicule an educational children’s book and turn it into something controversial and partisan. Our and Mrs. and Charlotte Pence’s goal is—and will continue to be—to educate young readers about the important role of the vice president, as well as to highlight the charities to which portions of the book proceeds will be donated.”

Chronicle Books, the publisher of the Last Week Tonight version, seems to have no such qualms about political controversy. They sub-tweeted Mike Pence in their promotion of the book, calling Stink Bug, a character in the book who is an anti-gay marriage politician, “temporary”.

“Because it doesn’t matter if you love a girl bunny or a boy bunny or eat your sandwich backward or forward. Stink bugs are temporary. Love is forever.” #betterbundobook pic.twitter.com/nqdbWDogSS

All of the proceeds from Oliver’s A Day in the Life of Marlon Bundo will go to The Trevor Project, which works to prevent suicide among LGBTQ teenagers, and the AIDS charity AIDS United. Proceeds from the Pence’s book will also be donated to two charities: an art therapy program called Tracy’s Kids and an organization that works to stop sex trafficking called A21.