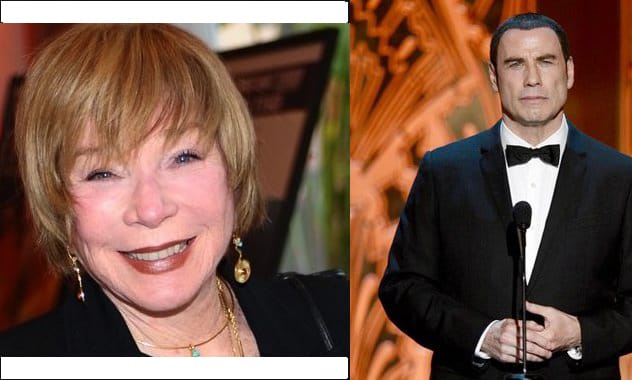 John  Travolta is in the building!

The 58-year-old Pulp Fiction actor has been out of the spotlight  ever since he was hit with a lawsuit accusing him of male-on-male sexual  misconduct.

But he’s back now.

Travolta was on hand tonight to be a presenter at the American Film  Institute’s tribute to Shirley MacLaine in L.A.

He didn’t sit in the audience like fellow surprise presenters Jennifer  Aniston and Julia  Roberts, but simply appeared onstage to give his  remarks.

Travolta presented MacLaine with video clips of her work alongside Aniston  and Roberts and focused his speech on MacLaine’s origins as a dancer before her  award-winning acting career.

“Shirley MacLaine is first a dancer, and when you move from Broadway to film  to television to writing to directing, you have to move to these things with the  grace of a dancer. To train and push harder than you ever thought you  could.”

During the event, MacLaine chatted with her tablemates, which included her Rumor Has It costar Aniston, her Steel Magnolias pals Roberts  and Sally  Field, Postcards From the Edge‘s Meryl Streep and Melanie  Griffith.

“I want to thank and pay tribute to the women at my table,” MacLaine said  during her acceptance speech. “Because they’ve been my compadres, my other  half of the sky, my sustained belief that women who speak their truth will make  the world a better place.”

“I want to thank all the fabulous costars, male, that I have worked with,”  she continued. “Those I’ve made love to on the screen, and those I’ve made  love to off the screen. I swear I remember maybe half.”

by Marc Malkin and Brett Malec

Is ‘Jersey Shore’ Ending?: Season 6 Will Be The Original Cast’s Last
Ryan Gosling & Eva Mendes Cause A Stir At Brock University Graduation (VIDEO)