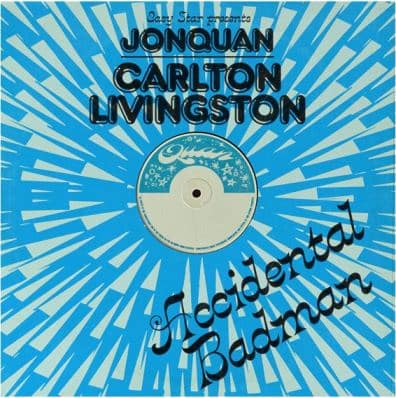 Though JonQuan is relatively new to the reggae scene, you’d never know it by listening to the music on the upcoming EASY STAR PRESENTS JONQUAN & ASSOCIATES. Working closely with two-time GRAMMY winner Victor Rice (Easy Star All-Stars, Bixiga 70, Ticklah), JonQuan has fashioned an album’s worth of brand-new tunes that evoke the majesty of the golden age of reggae. These tracks will be released as singles over the course of the late summer and fall, culminating in an album release in early December. The first single is a collaboration with Jamaican veteran Carlton Livingston, called “Accidental Badman,” which is inspired by a real-life tale of someone Livingston knows who went down a path of crime due to circumstances beyond his control. Stream and download the new single & dub version here: http://moremusic.at/AccidentalBadman.

JonQuan says he “…was inspired over the pandemic to create my own original riddims to cure the boredom and woes of being off stage and locked down.”  JonQuan has been the frontman, songwriter, and keyboard player for Buddha Council, based out of Virginia Beach, for the past few years. Once he had an album’s worth of riddims, he set about finding great vocalists to collaborate with. He knew he wanted the right musicians and vocalists. “This is my first project where I produced the riddims myself. I wanted to leave the door open for the players of all other instruments for maximum creative input, but within certain parameters. I personally chose who I wanted to play what instrument on what song. I’m most accustomed to live writing with a band while feeling for a groove.” For the first single, that meant Carlton Livingston, who John had backed in the past.

Livingston is best known for his 1984 hit song, “100 Weight of Collie Weed,” which made him a household name in Jamaica, but he has been recording since his earliest sessions at Channel One in 1978. He later garnered international success for his collaboration with Shabba Ranks on “Don’t Follow Rumors,” produced by Bobby Digital.  He has been based in Brooklyn for years.

Drums and keys were recorded together at JonQuan’s studio, Quan Records. Bass and guitar were played by Brett Tubin (Channel Tubes) at his studio in the East Village, NYC. Horns were recorded at Shag City Studio in Brooklyn by Matt Kursmark and played by Skatalites’ tenor sax player, Anant Pradhan. Victor Rice mixed the track (and the rest of the album) at his Studio Copan, in Sao Paulo, Brazil. Each single will have an accompanying dub version from Rice.

JonQuan adds, “Channel Tubes, in my humble opinion, is one of the best reggae guitarist and bassist around. His deep knowledge of production and producers allows his effortless style. Victor Rice, a staple figure in the NYC sound’s foundation, was first and only choice when I thought of a mixing engineer. His dubbing style and knowledge of voice processing and outboard gear gives his sound a one-of-a-kind vibe. Working with Carlton Livingston is a joy every time. His voice is as crisp as it was back in the days”

Once JonQuan had the record finished, Victor Rice made the connection to Easy Star Records, his label for the past few years. For the team at Easy Star, they felt like they were reconnecting with their own origins as a label, as their very first release was a similar project, EASY STAR VOL. ONE, which paired their own foundation-inspired original riddims with vocals from both Jamaican veterans and New York City-based newcomers. A generation has passed since that project, with the label since becoming a major player in the genre, and an entire U.S. reggae scene evolving into a major force, so getting involved with this scrappy upstart project that had so much energy and creativity was a joy for the label.