Well, another South By Southwest (SXSW) festival has come and gone, leaving behind a sensory overload for the eyes, ears, and imagination. This weekend the event got to show off its musical ambitions, which included performances by 50 Cent, Eminem, and Juanes. And they were a great way to cap off nine days of phenomenal entertainment.

SXSW began its run in Austin two Fridays ago, with the premiere screening of Cabin In The Woods. A highly-anticipated horror/comedy from sci-fi mastermind Joss Whedon, it got the movie portion of the festival off to a thrilling start.

The other big SXSW movie of the week was 21 Jump Street. The Jonah Hill comedy had its at premiere at Texas’ Paramount Theater and has since gone on to shatter box office records nationwide. Other festival film debuts included Jack Black’s Bernie and Babymakers from the Broken Lizard comedy troupe.

SXSW also had plenty of gadget highlights for Texas techies. Sean Parker (who helped launch Facebook and Napster) made a memorable appearance, hosting a panel about how to spread charity via the web, together with former vice president Al Gore. Reps from Pandora were present too, illustrating interactive developments for their online music site.

Other geeky goodies from the festival included a new Facebook app that lets you create more user-friendly videos (courtesy of Viddy) and a location-based Foursquare rival from tech giant Uberlife.

But the SXSW events that drew the most attention came courtesy of Juanes, Bruce Springsteen, and 50 Cent. Everything related to music attracted huge crowds, particularly Springsteen’s Thursday keynote address. For two hours, “The Boss” delved deep into his musical past and offered quite a lot of insight into how he make records.

“There is no pure way or right way of doing it. There’s just doing it,” he said before the cheering audience.

By the time Friday rolled around, the concerts were in full swing. At the Austin Music Hall, 50 Cent brought out Eminem for a riveting performance of “Patiently Waiting.”  Across town at Fader Fort, The-Dream wowed the crowds with a very invigorating live set (which included an amazing rendition of “Walkin’ on the Moon”).

But the place we wanted to be most Friday night was Austin’s Moody Theater. There Juanes tore up the stage, performing his signature hits and a Woody Guthrie cover (in English, no less!). Flossing a “PEACE” shirt and an acoustic guitar, El Rockero shared some deep affections with the crowd.

“[SXSW] is the greatest experience of my life,” he said. “I’m so happy and so thankful. It’s changing my life. I just feel it. It’s inspiring me, and that’s the best.” 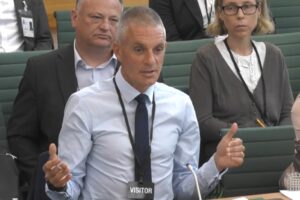 BBC Director General Tim Davie Rows Back On Digital Switchover Remarks: “We’re Not Putting A Date On It Or Anything Stupid Like That” 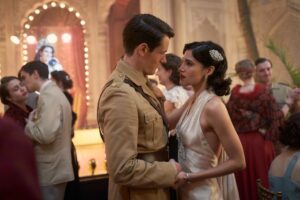 Banijay Says Revenue Will Hit $3.2B In First Look At Production Giant’s Earnings