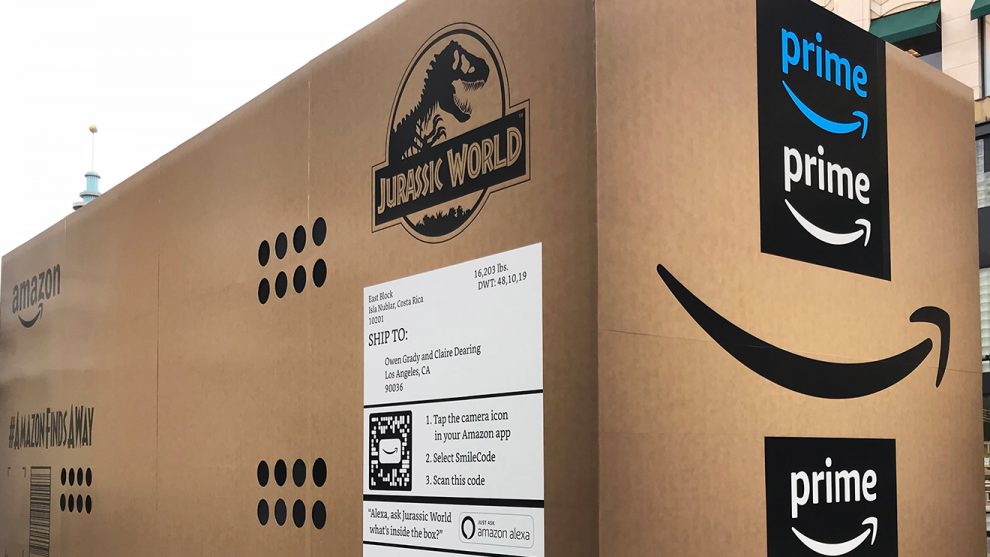 AMAZON AND JURASSIC WORLD: FALLEN KINGDOM MAKE THE LARGEST “DELIVERY” IN AMAZON’S HISTORY AT THE GROVE
Stars Chris Pratt and Bryce Dallas Howard Will Unbox the Enormous Surprise at The Grove in Los Angeles on June 2 at 12 P.M. PDT #amazonfindsaway
Advance Tickets Now on Sale for Jurassic World: Fallen Kingdom

Universal City, CA, May 31, 2018—Universal Pictures and Amblin Entertainment’s Jurassic World: Fallen Kingdom, in collaboration with Amazon, announced today that the largest “delivery” in Amazon’s history was made to The Grove in Los Angeles on May 30, escorted by a Jeep Wrangler motorcade.

The massive box—40’ L x 14’ 9” H x 14’ W—is now on display, but the contents are still under wraps until June 2 at 12 p.m. PDT.  Fallen Kingdom stars Chris Pratt and Bryce Dallas Howard will be on hand to unveil the Jurassic-sized surprise.  The soon-to-be-unveiled content(s?) of the growling package will be on display until June 10.  Fans can follow the mystery on social with #amazonfindsaway, as well as get tickets to Jurassic World: Fallen Kingdom, which arrives in theaters on June 22. About the Jurassic World Revealed skill for Alexa

The Jurassic World Revealed skill features six chapters of premium audio adventure with a new original story.  Fans will travel to Isla Nublar with fictional podcaster Janet Best in a daring attempt to report on the fate of the dinosaurs as the island’s dormant volcano roars to life.  Players who visit the Jurassic World Revealed skill for Amazon Alexa today can sign up to receive a notification on June 22 when the premium experience is available.  To get started once the experience is available on June 22, simply enable the skill and say, “Alexa, open Jurassic World.”

About The Grove L.A.
The Grove, developed by Caruso in 2002, is one of the country’s most acclaimed shopping, dining and lifestyle destinations, attracting guests each year from Southern California and around the world.  The Grove tops Shopping Center Today’s list of top 10 shopping centers in the world based on sales per square foot.  The Grove ranks #2 on Fortune’s: 10 highest sales-generating shopping centers in the U.S. list and ranks #2 on CNBC’s “The top 10 American malls” list based on sales per square foot.  Blending an array of exciting, high-end retail choices with a community feel, The Grove is a gathering place where people can spend a whole day shopping, dining and spending time with family and friends.  The Grove pulses with style, warmth and energy, which is why the world’s leading brands and personalities come to The Grove to launch their latest ventures, including Elizabeth and James, from designers Ashley and Mary-Kate Olsen, which opened its first brick-and-mortar location and L.A. flagship, and why many of its stores including Nordstrom, Barneys New York, Diane von Furstenberg, American Girl Place, J.Crew, Apple, Vince, Nike, Shinola and Topshop Topman achieve among the highest sales volumes of any in their respective chains. Get the latest news and events for The Grove at www.TheGroveLA.com; on Twitter at www.twitter.com/TheGroveLA; on Facebook at www.facebook.com/TheGroveLA; on Instagram @TheGroveLA; or download the Caruso app in the Apple or Google app stores.

About Jeep Brand
Built on more than 75 years of legendary heritage, Jeep is the authentic SUV with class-leading capability, craftsmanship and versatility for people who seek extraordinary journeys.  The Jeep brand delivers an open invitation to live life to the fullest by offering a full line of vehicles that continue to provide owners with a sense of security to handle any journey with confidence.

The Jeep vehicle lineup consists of the Cherokee, Compass, Grand Cherokee, Renegade and Wrangler.  To meet consumer demand around the world, all Jeep models sold outside North America are available in both left and right-hand drive configurations and with gasoline and diesel powertrain options.