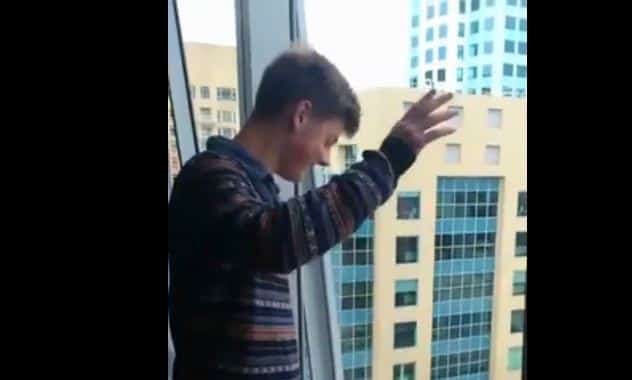 These die-hard Bieber fans are going to be really disappointed when they see this.

A young man who’s reportedly staying at the same hotel as Justin Bieber used his looks to taunt crowds waiting outside the building, the video’s YouTube description explains.

The Bieber look-alike is met with high-pitched cheers each time he peers at fans below. And although the impostor might not have Biebs’ fashion sense, looks can be deceiving from several stories away.

Of course, there’s always the slight possibility the real Bieber appeared in another window at exactly the same time. After all, the teen heartthrob has been known to surprise fans with unexpected gestures.

Last month, Bieber serenaded fans from a balcony in Paris. The Canadian singer told his Twitter followers to join him for a sing-a-long outside Universal Music headquarters, and those who showed up got to hear Bieber perform “Boyfriend” through a megaphone, Celebuzz reports.

YouTube user millyengland posted the Bieber fake-out clip online on July 15, and within a few hours, it was featured on Reddit’s front page.

Bieber is currently in Australia for a promotional tour. He’s scheduled to visit Melbourne and Sydney for interviews and an appearance, the Herald Sun reports. Questions about Selena Gomez are prohibited.