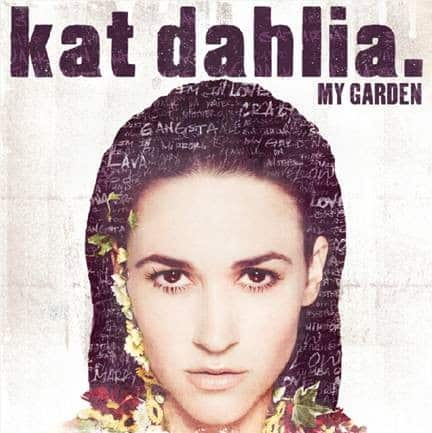 “DAHLIA’s first album, My Garden, was a long time coming, but the wait was clearly worthwhile. It’s a stellar album that truly does not sound like a debut.” – NPR

With KAT DAHLIA’s current single “Crazy” climbing the charts, iTunes recently chose the single as its “Single of the Week.” It became Sony’s second highest download in recent history.

Critics and tastemakers have unanimously fallen under KAT’s spell. NPR debuted My Garden as part of its prestigious “First Listen” initiative. They wrote, “DAHLIA eschews the gaudy over modulation of her young counterparts, opting instead for raspy vocals reminiscent of Janis Joplin and onstage frankness that is alternately hilarious, cringe worthy, and thought-provoking.” The New York Times says, “Her grit, though, is tactile,” Billboard writes, “An early listen to the album finds a mix of grit and streetwise soul that puts DAHLIA at the forefront, with her throaty, muscular vocals scraping the sugar off even the poppiest moments,” Latina claims, “KAT DAHLIA unveils a unique sound and sensibility with her upcoming debut album, My Garden,” and Entertainment Weekly admits, “it has us going even more loco.” While Artist Direct calls the album a “flawless new record,” Kat Dahlia has penned an album that critics are raving over.

Her influence continues to expand across the musical spectrum. She recently co-wrote the hit “Bajo la Tormenta” from the powerhouse salsa compilation EP, Sergio George Presents Salsa Giants. The track soared to #1 on iTunes Top Latin Songs chart and Billboard’s Tropical Songs chart, giving the songstress her very first number one. Moreover, she teamed up with Ricky Martin as the writer for the English adaptation of his new 2015 single “Adios.” She’s not slowing down though. She recently teamed up with VEVO and delivered five riveting exclusive performances: http://www.vevo.com/watch/playlist/x/73de5b2f-bfe5-407f-a3c6-b6c4ae1c48b6

It’s shaping up to be a huge month for the songstress. She teamed up with Interview Magazine to premiere the official video for the title track “My Garden” on January 16. The scintillating and transfixing visual sees the chanteuse deliver a chilling performance of the song as a snake slithers around a bed of flowers where she lay. It’s both strikingly seductive and undeniably unforgettable. Take a look at the behind-the-scenes of the forthcoming music video:


KAT is also gearing up to perform on NBC’s The Today Show on Monday January 26 for what is sure to be a moment not to miss. In the meantime, fans can savor their appetite for more KAT DAHLIA and visit MTV to view an exclusive Kat on Kat interview.