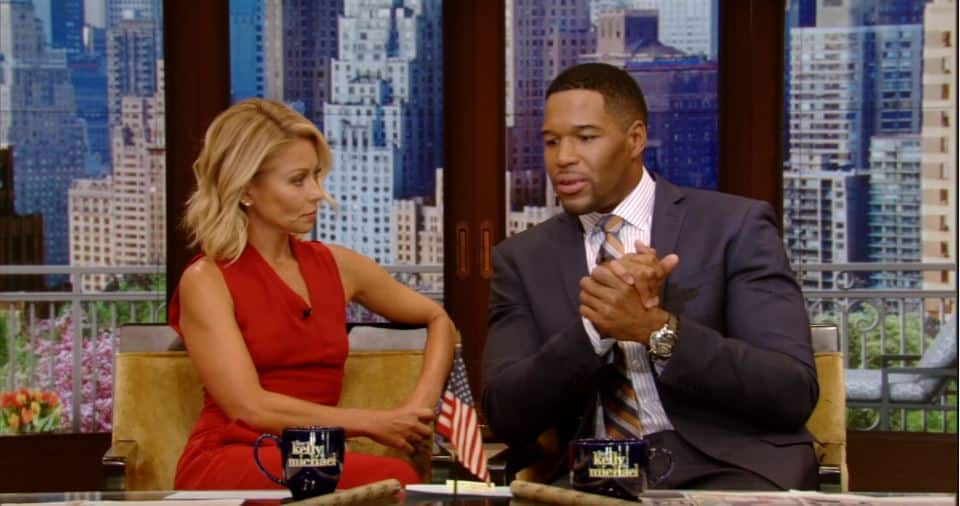 All’s well that ends… with Kelly Ripa back in her rightful place at the Live With Kelly and Michael hosting table?

Daytime TV’s most riveting drama seemingly came to a close on Tuesday when Ripa returned from a nearly week-long absence from her morning talk show, a break she’d said she needed to “process” news of co-host Michael Strahan’s upcoming move to ABC’s Good Morning America.

Strahan’s exit announcement, made after last Tuesday’s Live, reportedly blindsided Ripa when she found out shortly before the general public, prompting her to skip work on Wednesday and Thursday, and according to the network, take a planned vacation Friday and Monday. As a result, Strahan was forced to awkwardly address his looming exit opposite guest co-host Ana Gasteyer last Wednesday.

On Tuesday, Ripa took the stage hand-in-hand with Strahan and immediately addressed the elephant in the room, while standing alone, to the right of the table, the audience on their feet and cheering wildly: “Our long national nightmare is over,” she said, kiddingly. “I first want to honestly, sincerely thank you for welcoming me back to the show. The show of support in this bizarre time has been overwhelming.”

“I needed a couple of days to gather my thoughts. After 26 years with this company, I earned the right,” the All My Children vet said, before joking that half the audience had probably called in sick to attend Live as well. “So, we get each other.”

Ripa said she wanted to speak from the heart — but not say anything she’d later regret. “What transpired over the course of a few days has been extraordinary, in the sense that it started a much larger conversation about communication and consideration and most importantly respect in the workplace. And since we’re being honest, I don’t consider this just a workplace. This is my second home.”

“This is a place that I’ve devoted myself to, not just because of you, our loyal viewers, but because of all of the producers and the crew who work on this show. We have an incredible team. We are incredibly devoted to one another. We are family.”

The best thing to come out of the controversy? “Our parent company has assured me that Live is a priority,” Ripa said, before looking offstage to fellow staffers and adding, “Guys, calm down they didn’t say anything about Christmas bonuses.”

“I am thrilled for Michael. I am thrilled for you. This is a tremendous opportunity and I couldn’t be, and we couldn’t be, prouder of you and everything we’ve accomplished together,” the embattled host continued, before concluding that “this is entertainment, it’s supposed to be entertaining, so let’s get back to what we do best and start the show.”

With that, Ripa joked that, “My dad, who was a bus driver for 30 years, thinks we’re all crazy. And I think he’s right!”

As Ripa took her seat at the Live table, Strahan took the opportunity to address Ripa directly: “One thing I know about you is you love this show, you love the fans, you love the staff,” Strahan said, smiling. “I love you and I’m so happy you’re here because you brought me here with Gelman and this show has been transforming for me, and I know this show lives on because you’re the queen of morning television and will continue [to be].”

Ripa’s cheeky response? “Oprah’s the real queen. How dare you.”

Ripa went on to add that while she did indeed take a day to “process,” the rest of her absence was scheduled. “People think we’re making all of that up, [but] it’s true we had a trip planned for a long time,” she added, noting she and husband Mark Consuelos got out of town to celebrate their 20th wedding anniversary.