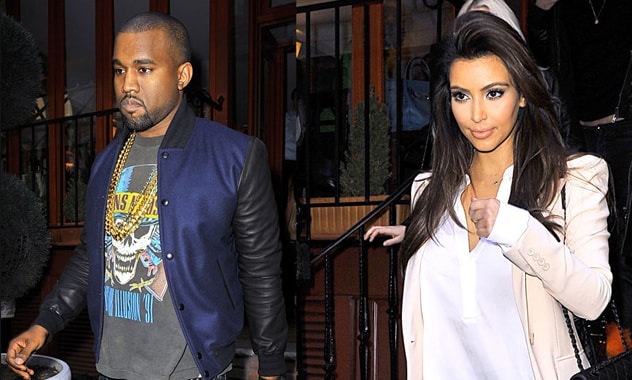 Despite persistent rumors that Kanye West proposed to his girlfriend and the mother of his child Kim Kardashian, the two are probably not engaged.

Kimye welcomed their first child, a baby girl by the name of North, just last Saturday. Yesterday, British tabloid The Sun reported that Yeezy proposed to his reality star girlfriend just days after North was born, because now that they have a child together it makes sense to get married.

The Sun goes so far as to say West gave his Kardashian a $770,000 “rare black and tiger-stripe diamond ring” and that “the pair are planning a wedding in Paris this September.”

Though it sounds plausible — Kanye spent a lot of time in Paris these last few months and he does like to spoil his better half with fancy jewels — People magazine debunks the rumor completely. Says the magazine’s source, Kanye has yet to pop the question but marriage is definitely “in their future.”

Either way, Kanye is reportedly very serious about his lady love, and has previously stated he wants to have six kids with her. On her end, Kim told Cosmopolitan magazine’s April issue that “[marriage] is something I know that we both want in our future, but I don’t have this sense of urgency about it. I have this best friend who understands me and helps me through all my tough experiences, and vice versa … It just feels like this is it for me.”

A request for comment made to Kim’s reps was not immediately answered.