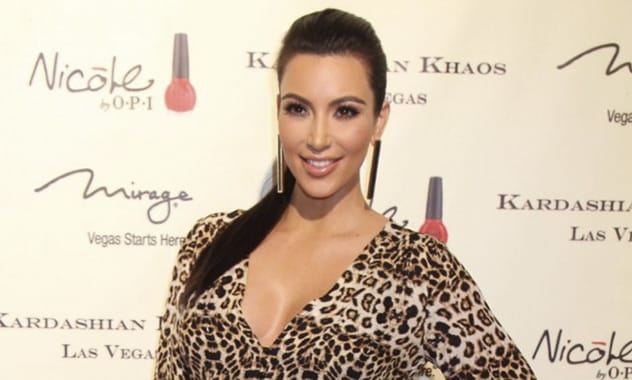 Kim Kardashian phoned in to On Air with Ryan Seacrest to wish Ryan and Ellen K. a happy 10th anniversary, as well as talk about her upcoming wedding to Kanye West and the bliss of motherhood.

After congratulating Ryan and Ellen on their decade of success, Kim gushed that all is well in her own life. “I’m loving life right now. My daughter is the cutest thing ever … I’m loving being a mom … I never thought I would say that. I went into this so scared … I always wanted kids, but when I got pregnant I was so scared, but everything everyone tells you about having a kid …. about how it’s amazing … it’s that times 100.”

And although the pregnancy with North West was difficult and Kim thought she’d never do it again, she reveals that she’s changed her mind now.

“I love my daughter so much and I know … I want to have more, but I’m not going the route my mom did. She is crazy! When I was giving birth, I looked at her and said, ‘I’m going to buy you a medal, you deserve a medal for this, six times – you’re crazy.’”

And baby North is doing just as well as her mom. “She’s the sweetest, she’s the calmest and all she does is laugh,” Kim shares. “She’ll laugh at anything. I’ll put my toe right near her and she’ll crack up. She’s the sweetest, happiest baby I’ve ever seen.”

The new mom goes on to say baby Nori is even doing well at sleeping through the night. “She wakes up about once. Kanye now sleeps through her little wake up, but she’s calm and I’ll get up.” However, Kim does admit: “I’m a little exhausted, but New York has been tough for her to sleep through the night.”

Given that little Nori is such a good baby, will the the 33-year-old have more kids with fiancé Kanye West? She’s undecided, but it sounds like a yes!

“I don’t think I can do more than three tops. That would be my absolute top top tops. I even contemplate should North be an only child? But then I contemplate all the … fun experiences I had, so I might have to tough it out … I was talking to [Kourtney‘s son] Mason about it the other day. He was like, ‘Can you make a boy? I need a friend to play with.’ And I was like, ‘Let me think about that!’”

When it comes to North’s dad, Kanye, Kim couldn’t be more smitten.

Although the rapper revealed to On Air With Ryan Seacrest last October that he was nervous to pop the question, Kim shares, “I don’t know how he could ever think that! I mean I obviously think as a guy it’s a nerve-wrecking thing and every thought goes through your mind, but I think in his heart he knew I’d say yes. I mean, we have a child together … and I think it’s the right time.”

Despite being head over heels in love, Kim admits she didn’t always think it would happen.

“I think you never know what it’ll really end up being like until you try and have a relationship and two years ago we tried and we realized it really does work. But [in the beginning], I was looking at it in such a friend way for so long and he was there to support me and be that friend to really talk about every experience I was going through, so it breaks my heart to look at it now and think I must have been killing him inside when he felt a certain way.”

“But I think also he would say now is the right timing,” Kim continues. “If it would have happened a long time ago, I don’t think it would’ve worked out. We had to go through so many experiences … We were talking about this the other day, we met like 12 years ago and I’d say about like 10 years ago … we started to become cool and friendly and kept this friendship ever since and it would go in and out as we had relationships … but we had such a strong bond and he’d step back and let me make mistakes and maybe told me a couple times I was making mistakes, but … he’s really held my hand throughout my mistakes and I don’t think I’ll ever find a friend that’s as supportive.”

And that of course is why they’re getting married! When it comes to the planning, Kim admits they’re both involved, however, “there’s certain things I’m like, ‘I know you’re going to hate the seating chart, so I’ll take care of this.’ And then there’s some things that are really important to him, [but the] seating chart is like death.”

Luckily, that job should’t be too much work since Kim explains they’re having a “super, super small intimate” wedding. “As we are going along, we realize we want it to be smaller and more intimate than people are imagining and thinking.”

When and where will the big day be? ”I’ll tell you it’s in Paris, but I’m not saying when, but it’s this year.”

Catch Keeping Up With the Kardashians on E! Sundays at 9/8c.