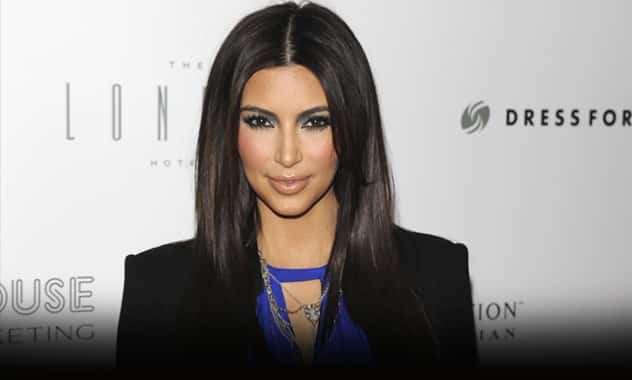 It’s true what they say: No good deed goes unpunished. This week, Kim Kardashian decided to aid victims of the devastating Typhoon Haiyan in the Philippines by selling off a boatload of items from her closet, a la Victoria Beckham. It’s a lovely gesture, but it’s one that has sparked a firestorm of social media outrage after it was pointed out that only 10 percent of the proceeds were going to charity.

Kim’s charitable eBay auction launched on Thursday with a number of gently used designer goods, including Christian Louboutin diamond-embellished platform pumps and this Givenchy white dress that she wore while pregnant with daughter North (and was suffering from painfully swollen tootsies).

“Hi guys, this is a very special auction because a portion of the proceeds of my eBay auction are going to International Medical Corps, a nonprofit organization that provides critical health services on remote islands where families are struggling to access medical care and basic resources like food, clean drinking water and vital medications,” Kardashian wrote on her website. “The proceeds will go directly to the communities they’re serving in the Philippines and will help typhoon survivors get access to medical care and ultimately save lives. My prayers and thoughts are with those affected by the typhoon.”

Reaction to Kim’s benevolent effort was swift and merciless.

“Kim #Kardashian is on eBay selling some of her clothes for charity. 10% goes to the charity. Hope that doesn’t break her! #generosity #vile,” tweeted one.

“What on earth does she need the money for?” asked another.

So, does charity begin at home? We reached out to Kim’s rep, who expressed frustration that an altruistic gesture on the part of the future Mrs. Kanye West has been turned around, calling her an “easy target” for criticism.

Kim “consistently” auctions off her couture, explains her spokesperson, and always gives 10 percent of the money away (usually to her church).

It’s “something she learned from her father,” and she does it year-round, “not just when there’s a tragedy,” adds the rep.

For this particular auction, Kardashian decided to change the beneficiary in order to help the Philippines, but she kept the percentage at the usual number.

Given how high end the items are (other designers represented include Chanel, Gucci, Lanvin and Balenciaga), a good chunk of change should be raised, even at the 10 percent rate. Could she do more? Of course, but then so could most of us (ahem, we’ve been meaning to make a donation, we swear). So maybe let’s cut Kim some slack on this one, because at least she’s doing something instead of nothing.

‘Muppets Most Wanted’ Trailer: Kermit Wanted Dead or Alive
‘Alice In Wonderland 2’ Set For May 2016, With Johnny Depp And Mia Wasikowska Officially On Board