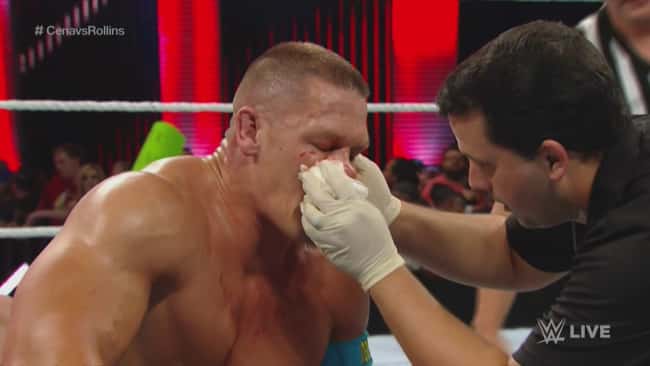 John Cena broke his nose on WWE’s “Monday Night Raw” while fighting Seth Rollins. The gruesome injury happened when Rollins kneed Cena in the face during their match. If so inclined, watch the video below.

In the immediate aftermath, Cena laid on the mat in pain as blood poured out. But even though his nose was broken and you could visibly see it pushed to the side of his face, the WWE wrestler kept fighting. And a few times during the match, it looked like Cena was going to lose, but in the end he actually pulled through and won.

Steve Daquino, a WWE doctor, later confirmed Cena’s nose was broke, saying in a statement, “He’s got quite a bit of displacement, so we sent him over to the local emergency room so he can be evaluated by the ears, nose and throat doctor… and see what can be done to properly repair it.” Shortly after the match, Cena took to Twitter to write, “#NGU,” which stands for never give up. His girlfriend Nikki Bella also commented on his injury, tweeting, “My man @JohnCena is legit Superman. The strength & heart he showed 2night was unreal. Continues 2always be a huge inspiration 2 all of us!”

Cena, despite his injury, is still expected to participate in SummerSlam on August 23 at Barclays Center in New York. According to reports, it’s believed he’ll challenge Rollins to another fight for the WWE Championship title. The star can currently be seen on the big screen in Trainwreck.