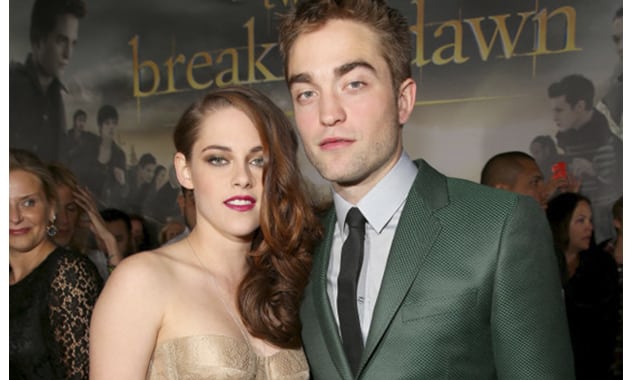 Finally, the moment all Twi-hards have been waiting for.

On Monday (Nov. 12), the cast of “Twilight” hit the red carpet at the Nokia Theatre L.A. Live in Los Angeles, Calif., for the premiere of the final installment in the franchise, “Breaking Dawn – Part 2.”

But all eyes were on Kristen Stewart and Robert Pattinson as they greeted fans, signed autographs and made their way down the carpet. The on and off-screen couple — who have yet to confirm their relationship after Stewart’s now infamous cheating scandal with director Rupert Sanders — were all smiles as they posed together last night, with the actress affectionately rubbing Pattinson’s back while the cameras snapped.

Stewart, 22, looked beautiful wearing a nude lace and chiffon strapless corset gown by Zuhair Murad, with her hair swept to one side in curls. Pattinson, 26, also looked dapper, donning a fresh haircut and a forest green suit.

Unlike prior “Twilight” tours, the couple have been promoting “Breaking Dawn – Part 2” separately, appearing on the “Today Show” and late night programs days apart. But despite the drama surrounding the unknown status of their rekindled romance, Stewart and Pattinson don’t mind keeping tight-lipped on the subject. (As always.)

And Pattinson’s response was equally misleading. “I want to ask, because we get asked it all the time. Who is actually asking?” he asked Guthrie, smirking. “Is it in your contract?”