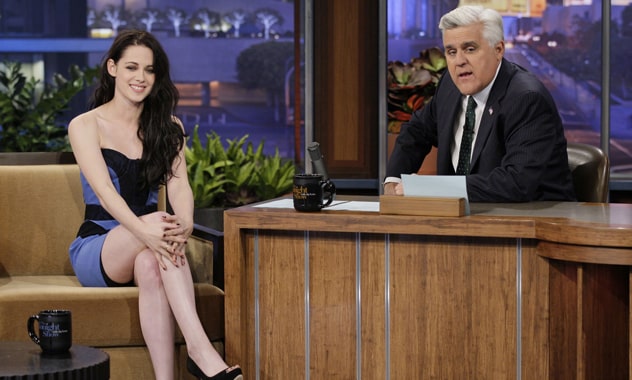 Twihards are gearing up for goodbye with the premiere of the final installment of the “Twilight” franchise, but they may also have to brace themselves for the unexpected.

Kristen Stewart stopped by “The Tonight Show with Jay Leno” on Monday night to talk about the final “Twilight” film, “Breaking Dawn – Part 2,” and its twist ending.

“It is so shocking, to be honest,” Stewart said of the final “Twilight” film’s end, which is different from the book. “I couldn’t be more inside of it. I couldn’t be more in the loop. Every time I see it or even think about it I get giddy. It freaks me out.”

She eased worries a bit when she revealed that the twist can be found in the pages of the novel itself. “If you read the book, we’re not straying too far from [‘Breaking Dawn’], we are always very religiously faithful to details,” Stewart said. “It’s easy to skim over, but you can find the root of our little twist.”

But author Stephenie Meyer does not want “Twilight” fans to think the “twist” will completely throw them for a loop.

“I wouldn’t call it an alternate ending,” Meyer said, according to E! News. “The end was something we knew that had to be cracked…In a way, it’s kind of offscreen in the novel because we only see what Bella sees. This was just a way of making visual what some of the other characters might have been seeing. It does feel very surprising…There’s definitely something new to see, but to me it doesn’t seem like we’re going hugely off the page at all.”