Lady Gaga’s meeting with the Dalai Lama on Monday sparked China’s censors to issue restrictions on reporting about the singer, and call for a ban on streaming her music online in the world’s most populous country.

Gaga is sufficiently successful in western markets. But to date she hasn’t quite broken into the Chinese market. This is probably the reason why she had such a high-profile dialogue with the Dalai Lama, and is not considerate of the feelings of the Chinese people.

Gaga, a 30-year-old, likes to be original and unique, but might not be experienced in terms of politics. Many Chinese have heard about her and there are also some that like her songs. But in terms of politics and ethics she has no appeal at all to Chinese society. This incident has undoubtedly caused her to lose points in the hearts of Chinese. But she doesn’t have the power to harm the Chinese society. Thus, after some netizens taunted her and some media wrote reports and commentaries, the incident will soon be over with a sour aftertaste.

The op-ed fails to note that a key reason that the singer “hasn’t quite broken into” the Chinese market is that much of her music is banned there for “damaging the nation’s cultural security.” Her album Artpopwas approved for release only after changes to the cover art that included putting tights on the singer’s legs. 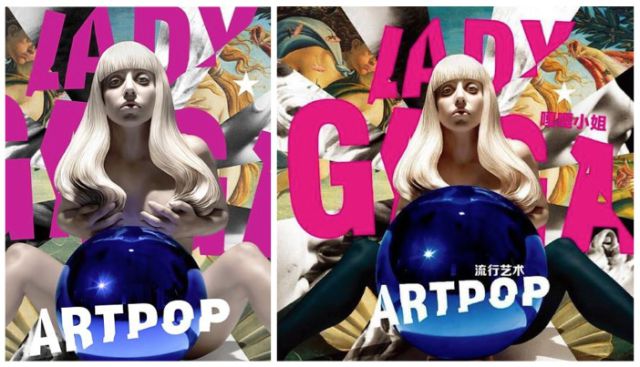 Despite the Global Times chiding, she does appear to have many fans in China, including over 2 million listeners (link in Chinese) on QQ Music, one of China’s most popular music streamers.

And to call her politically naive is, frankly, naive. Throughout her career Gaga has deliberately chosen to side with political and social causes, both inside and outside the US. It is hard to i
magine that she accidentally sat down with the Dalai Lama, who is a long-time advocate of autonomy of Tibet, and therefore an enemy of Beijing, without thinking about the implications.

Lady Gaga was outspoken in her support of the LGBT community in Russia, for example, which has faced increased suppression under in recent years. She was overtly confrontational towards the Russian government—at the “Born This Way Ball” in 2012 she told the audience“I believe that men and women deserve to love each other equally,” adding “Arrest me! I don’t give a f*ck!”

She later urged a boycott of the 2014 Winter Olympics in Sochi. “I just think it is absolutely wrong for so many countries to give money and [support the] economy of a country that doesn’t support gays…. It’s not just that they don’t support the gay community—they pepper spray and beat them in Russia,” she told British TV host Alan Carr. On her own Facebook page, she wrote: 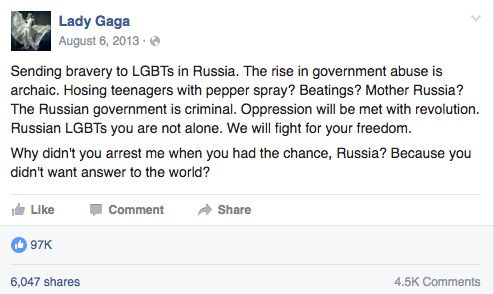 She also condemned the Turkish police’s crackdown on Istanbul’s Pride parade in 2015.

Istanbul? Who are these "leaders"! Stop attacking innocent happy people who are celebrating this is madness! This is inhumane!

Activism is not a hobby for Gaga. Through the years, she has broadcast her constant support for sexual assault victims, gender equality, andLGBT rights. These are causes which, contrary to what the Global Times writes, appeal deeply to at least some sections of young Chinese society.

Gaga’s meeting with the Dalai Lama deserves stands out in particular. Few business and famous people are willing to criticize the Chinese Communist Party’s suppression of human rights, so they can continue to access the country’s massive market.

This is true even if they’re willing to confront other governments. Mark Zuckerberg, for example, openly criticized Brazil’s shutdown on WhatsApp just months after publishing photos of himself with Lu Wei, China’s internet czar who has waged a war on open information on the web.

In the same op-ed, the Global Times concedes that Lady Gaga is an outlier:

In the past few years more and more western celebrities in all kinds of fields have avoided association with the Dalai Lama. The vastness of our market has commanded more respect, which is good for our country. The actions of Lady Gaga are out of the ordinary—but her strong character is unlikely to be widely imitated in the West.

Lady Gaga’s estimated net worth is $275 million, even though much of her music is not available in China’s “vast” market, so perhaps she’s decided she just doesn’t need more money. Rather than being “politically naive,” her meeting with the Dalai Lama may be a carefully considered statement highlighting one of the Communist Party’s worst fears—she just doesn’t care what they think.