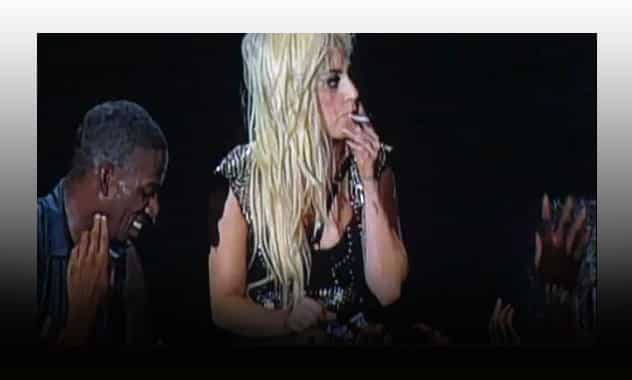 When in Amsterdam, do what the tourists do.

Lady Gaga kept it superloose during a concert stop in the Netherlands capital, taking a few hits off a big fat joint that was passed to the “Poker Face” singer by one of her little Monsters.

Of course, that’s par for the course in Holland, where smoking marijuana is legal (and for the Dutch no big deal).

“You guys having fun?” the pop superstar asked her fans after parking herself at the front of the stage.

Gaga then pulled out a cigarette, but discarded it in favor of the spliff that spontaneously appeared from the crowd.

After a few puffs, the hitmaker tossed the joint back to the fans.

“And for those of you who are wondering if I’m high right now, I am not. That is not nearly enough to get me high,” Gaga giggled.

The crooner then accepted a few other pot-themed gifts from other fans—among them a drawing of Gaga over a marijuana leaf and a “Mary Jane” T-shirt.

Meanwhile Lady Gaga’s Born This Way Ball tour across the pond marches on, making stops in the coming week in Berlin, Paris and Zurich among other European cities.