Lana Del Rey has a very morbid imagination. Now a fine arts painter has commenced work on a portrait of the mercurial 28-year-old singer. The work is truly skin deep and comes at a bizarre juncture in Del Rey’s life.

The “Born to Die” signer just released a new album, Ultraviolence. One could argue that Del Rey’s state of mind appears to be mirroring her lyrics. Del Rey was recently quoted as saying, “I wish I was already dead” in an interview with The Guardian earlier this month.Perhaps this is just for publicity, but in any case Lana’s behavior is strange.

That quote didn’t led to immediate speculation that Lana Del Ray was suicidal, a subject that 21-year-old Los Angeles native and visual artist Frances Bean Cobain knows all to well, but it did start a discussion. Bean’s father, Nirvana frontman Kurt, shot himself in the early 90s and all he left behind was a cryptic note.

Thus Bean fired a warning shot at Del Ray. She warned Lana of the dangers of obsessing about death and sulking. Bean took to Twitter to share her dismay.

“The death of young musicians isn’t something to romanticize.”

Lana Del Rey eventually responded in a series of rambling Twitter posts. According to Lana, Tim Jonze the interviewer, misquoted her and basically cajoled her into agreeing to the sit-down in the first place.

Look the media wants a juicy story, but that would be really unethical of Jonze to corner Lana Del Rey like that. It’s unlikely that Jonze would subscribe himself to that type of dirty journalism. What’s more likely is that Lana got caught with her foot in her mouth, and is backtracking, as her post’s reflect.

Here’s where the painting comes into play. Mexican Artist Gustavo Rimada painted the creepy portrait in an “Art Nouveau, surrealist-contemporary style.” That’s a mouthful now isn’t it. Anyways, the life-size, waist-up portrait shows a contemplative Del Ray with her bones on displayed. 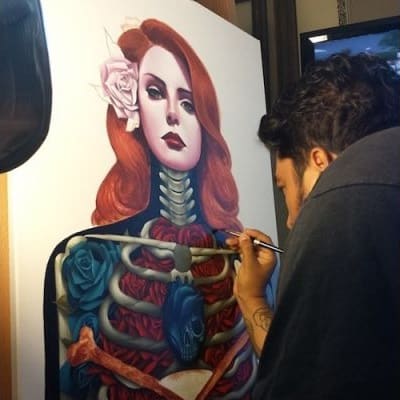 Instead of going all macabre and showing her insides, blood, guts, and all, Rimada went the tasteful route and filled his version of Lana up with red and blue roses. Tying the portrait together is a heart-shaped skull, seemingly epitomizing life after death.

The painting isn’t finished yet, but when it is we’ll have to wait and see what reaction Lana has to it, if she feels anything at all.

A special shout out has to be given to Andrew Lasane of Complex for discovering Rimada’s painting on Instagram amid a sea of other less noteworthy posts.