Loren Medina is the president and founder of LCM PR Inc., a public relations, social media marketing, event producing and consulting company specializing in Latin entertainment. Prior to her opening up LCM PR, Ms. Medina founded and co-owned Digital Girl Inc. since 2009, a publicity and digital marketing company whose client roster included music icons such as:  Shakira, Maná, Calle 13, Ricky Martin, Aventura and companies such as AEG, Live Nation, Universal Music, Epic Records, Sony Music, SESAC, Quincy Jones Productions, among others. Loren has worked in the music industry for over 14 years, 7 years with her own company as a publicist and social media marketer, 4 as a label manager at Sony Music Entertainment and 3 as an artist manager and independent record label owner. Her education background includes a Bachelor of Arts in Psychology from Boston University and a Master’s in Communication Management from the University of Southern California (Annenberg).

Earlier this year, Ms. Medina became an adjunct professor at USC’s Thornton School of Music and is teaching the class “Do It Yourself: Marketing.” The class is an exploration of the most current and effective marketing strategies and online branding tools for promoting, monetizing, and sustaining the career of the independent creative artist. The class has garnered quite the buzz after having celebrity guest speakers such as Perez Hilton, who featured two of her students on his famed site PerezHilton.com.

The class already has a waiting list for next semester and is being expanded in order for more students to be able to take the class.

“This year I started teaching at my alma matter. It was a dream come true for me and a turning point in my career, not to mention I’m the first Latina to join Thornton’s faculty in recent years if not ever,” affirms Ms. Medina.

On December 10th, Ms. Medina will be producing the showcase DIY Music Lab along with her students which includes 17 artists, both current students and alumni, at Los Globos Nightclub in SilverLake. The event will take place from 4-9 PM and feature some of the hottest local indie artists from all musical genres, Pop to Funk to Indie Rock to Hip Hop. 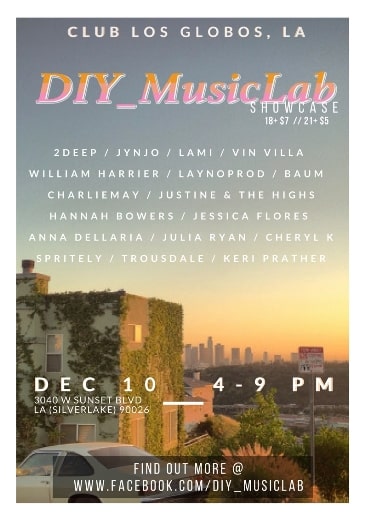