Liam Neeson and Thomas Brodie-Sangster, playing a father and his stepson, are sitting on a bench overlooking the Thames, discussing love. Yes, fans of the 2003 Richard Curtis movie “Love Actually,” you know the scene.

But on a chilly, sunny day last month, Mr. Neeson and Mr. Brodie-Sangster were out on that bench again, 14 years older and still on the same topic. They were filming a short sequel that Mr. Curtis, who wrote and directed the original movie, has made for Comic Relief’s Red Nose Day, an annual fund-raiser he co-founded in 1986, and that extended its mission to the United States in 2015. (The sequel, “Red Nose Day Actually,” is likely to be about 10 minutes long and will be broadcast in Britain on BBC One on Friday, and in the United States on NBC on May 25.)

Crowds walking in front of the nearby Tate Modern stopped to stare and take photographs of the actors. Then Olivia Olson, who played Joanna, the young object of Sam’s desire in the first film, joined the scene. There was an audible gasp from a woman near the front of the crowd. “It’s her!” she exclaimed. “They’ve grown up and they’re back together!”

Well, are they? Mr. Curtis has long refused to make a sequel to “Love Actually,” the feel-good, multiplot-strand film about different kinds of love — romantic, illicit, marital, unrequited, friendly, passionate — that takes place in the month leading up to Christmas and is now firmly anchored in popular culture as traditional festive season TV watching. (The film is not, however, loved by all.)

But last year, when Mr. Curtis and his partner, Emma Freud (who collaborated on the original), were living in New York, they went, on impulse, to a midnight screening of the movie. Afterward they speculated about what had happened to the characters. Some months later, when thinking about creating a special event for Red Nose Day, as he does each year, Mr. Curtis decided to try his hand at a short script that addressed that question.

Several months and thousands of emails later, Mr. Curtis had reunited much of the original cast — which includes Hugh Grant, Bill Nighy, Emma Thompson, Keira Knightley, Colin Firth, Andrew Lincoln and Rowan Atkinson — who agreed to take part for the charitable cause.

“I was nicely surprised when I got the call,” said Mr. Brodie-Sangster, now known to millions as Jojen Reed in “Game of Thrones” and Newt in “The Maze Runner” films. “You always think a little bit about what might have become of your character,” he said, adding, “I knew it would be the bench scene or the drums.”

Nearby, Ms. Olson, who now works as a singer as well as a voice actress for “Adventure Time” and other shows, was having her hair neatened. “Richard gave me my career,” she said. “I dropped everything and came,” flying in from Los Angeles for two days.

Although Ms. Olson and Mr. Brodie-Sangster both provide voices for characters in the cartoon series “Phineas and Ferb,” they had not, Ms. Olson said, seen each other since shooting “Love Actually.” (Recently Ms. Olson confessed to E! News that while filming the original, she had a crush on Mr. Brodie-Sangster, and that their onscreen buss was actually her first kiss.)

“Funnily enough, our characters got married on ‘Phineas,’” she said. “It was kind of an inside joke by the script writers.” She added. “Not that I’m suggesting anything about what happens here.” 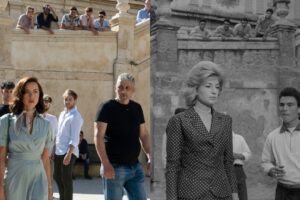 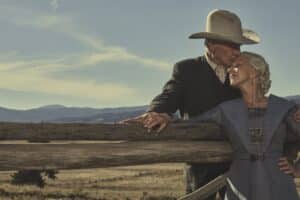 ‘1923’ Teaser: Harrison Ford and Helen Mirren Hunt Down Their Enemies in ‘Yellowstone’ Prequel 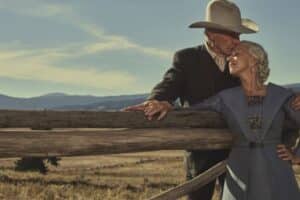