The Record-Shattering Single Is Steadily Climbing Charts Around The World, Breaking With Molds And Language Barriers Along The Way

“DESPACITO” Bows At #3 On Spotify’s Global Chart, Making It The First Spanish Song To Ever Reach Such A High Position On The Coveted Chart 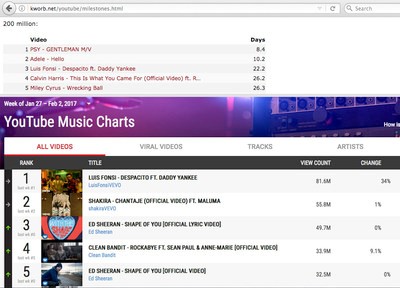 This Hit Single Also Sits Comfortably At The Top Of Spotify And Apple’s Charts In 17 Spanish Speaking Countries While Entering The Top 10 Position Around The World Including Italy, Portugal, Switzerland And Romania

Fans, Athletes And Celebrities Take To Social Media To Create Their Renditions Of This Viral Sensation; Among Them Lionel Messi, Dani Alves And Cristian De La Fuente Among Many Others

The infectious tune, produced by Andrés Torres and Mauricio Rengifo and written by Luis Fonsi and Daddy Yankee in collaboration with Erika Ender, has traveled well beyond their native Puerto Rico in record speed, shattering global records and dominating the charts worldwide.

Most recently “DESPACITO” reached # 1 on Billboard’s “Hot Latin Songs” and “Latin Digital Song” in the U.S. this week.

The single has also reached the #3 position on Spotify’s Global Chart, the highest position ever achieved by a Spanish single in history. “DESPACITO” also sits atop iTunes Latino’s “Top Songs” chart for the third consecutive week and #1 on Spotify across Latin America in 17 countries while beginning to peak in the “Top 10” charts in countries such as Italy, Switzerland, Portugal, and Romania, among others.

The music phenomenon has spread throughout the world breaking yet another Vevo record by becoming the fastest Spanish single (and 3rd fastest single in history after Psy “Gentleman” and Adele “Hello”) to reach over 200 million views in 22 days. It’s easy to see why this addictive video, directed by Elastic People’s Carlos Perez, has become so popular: great music performed by two of the biggest stars in the Latin music business, beautiful scenery and an ex Miss Universe, the gorgeous model Zuleyka Rivera

The craze has also taken a new life on social media where celebrities, athletes, and people all over the globe continue to make their renditions of the song including soccer stars Lionel Messi and Dani Alves.

Just last week, Universal Music Latin Entertainment awarded both artists with two RIAA plaques and multiple awards in commemoration of their record-breaking single which contrary to the name of the song is rapidly shifting pop-culture and breaking all cultural borders.