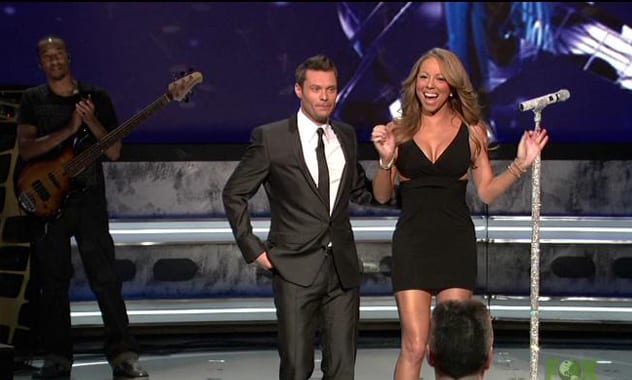 “I’m so excited to be joining ‘Idol.’ I wanted to be there today and I wish I could’ve been there myself to tell you,” Carey told the audience via phone after Reilly called her and put her on speaker. “It happened really quickly. I can’t wait to get started in a couple months. Everybody have a great TCA and I will see you in January.”

Reilly would not confirm any other rumors, including whether or not Randy Jackson will be back in judging capacity.

“We finished the show at the top again — Phil Phillips went to gold faster than any other ‘Idol’ in the history of the show — but our ratings were down,” Reilly said. “Not being the only game in town now we needed to keep things fresh. We had a dialogue with everyone on the bench. We have the biggest names in the business interested in doing the job. It’s going to be a matter of finding the right chemistry and making a deal. Randy has been working with Mariah for a long, long time. Randy was instrumental in doing this deal.”

Shortly after the announcement to the audience, Fox issued a statement confirming Carey’s “Idol” involvement.

“As a singer, songwriter and producer, it’s going to be fun and rewarding to help find new talent and give back with ‘American Idol,’” Carey said in a statement. “I’m currently in the studio working on my new album and its first single, ‘Triumphant,’ which will be out early next month. I can’t wait to channel my creative energy as a part of this show which is a massive global phenomenon.”

“American Idol” Season 12 will look different when it returns in January 2013. Jennifer Lopez and Steven Tyler are both leaving the show after two seasons. Veteran judge Jackson’s involvement with the series is also in question with rumors indicating he’ll move to a mentor role.

How long will Carey stay on the series? Details weren’t revealed, but “Idol” executive producer Nigel Lythgoe told audiences at the TCA Summer Press Tour that he can see having a new judging panel every year of the series.

“We are proud to have one of the world’s greatest-ever female singers join our show,” Simon Fuller, creator and executive producer of ‘Idol,’ said in a statement. “Mariah defines the word ‘Idol’ and will inspire every singer that has the honor of performing in front of her.”