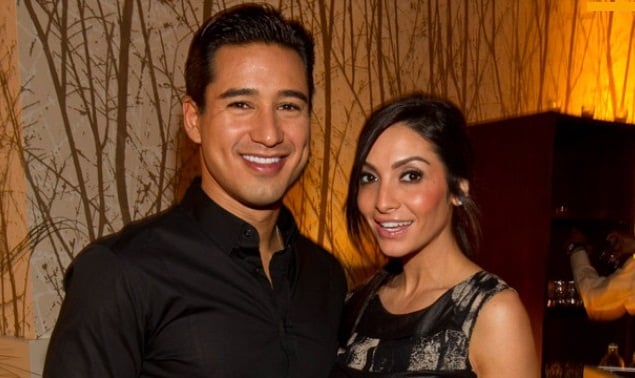 Congratulations go out to Mario Lopez!

The couple’s nuptials, which will air on TLC Dec. 8, brought out family and close friends, including Lopez’s buddy Eva Longoria. Lopez was escorted down the aisle by his mother and later joined by his beautiful bride as they exchanged personal vows just before sunset at the seaside estate of “Girls Gone Wild” creator Joe Francis.

And to add to the occasion, Lopez and Mazza’s 2-year-old daughter Gia served as flower girl, wearing a dress that matched her mom’s Ines di Santo gown. The reception kicked off with a little help from a mariachi band before guests enjoyed a wedding cake with a winter-wonderland-meets-beach theme by “Cake Boss” star Buddy Valastro.

Lopez and Mazza first met when they shared the Broadway stage in the 2006 revival of “A Chorus Line” and began dating in 2008. They got engaged on December 31, 2011, during a vacation in Ixtapa, Mexico.

“The only thing that’s going to change is my last name,” Mazza told Us Weekly of marrying Lopez. “Same love, same everything!”

This is the first trip down the aisle for Mazza and the second for Lopez, whose 2004 marriage to model and actress Ali Landry was annulled.