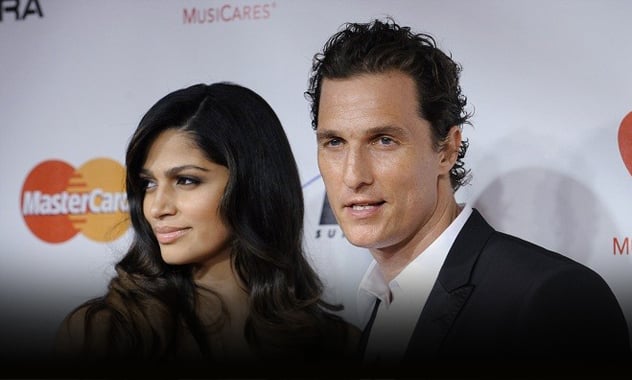 Newlyweds Camila Alves and Matthew McConaughey will be proud parents for the  third time!

McConaughey, who wed Alves two weeks ago, announced via Twitter

on the Fourth of July  that he and his wife are welcoming baby No. 3.

McConaughey, 42, shares two children with Alves, Levi, 3 and Vida, 2. The  actor and Alves have been an item since 2006, after meeting at a bar.

According to US Weekly

magazine, the Hollywood heartthrob and the Brazilian beauty had quite  the emotional ceremony, at their Austin, Texas home.

“There were no groomsmen or bridesmaids,” a guest told the magazine. “There  were two preachers, [a pastor of a local church] and a monk. They switched off  saying remarks.”

The lovebirds also made sure to keep their vows completely private.

“They whispered them in each other’s ears. No one knew what they said,” the  source added.  “Whatever they said was very emotional. [Camila] was tearing  up.”

The guests were also extremely emotional, according to the source who said “there were many tears around.”

“There was a lot of clapping and everyone was happy,” the sources continued,  adding that “Matthew loves her and there is no doubt about that.”

McConaughey popped the question over the Christmas holiday last year and then  took to Twitter to tell his fans about his new fiancé.

“Just asked Camila to marry me, #MerryChristmas,” McConaughey posted on his  Twitter account, followed by a link that led to a photo of the two kissing.