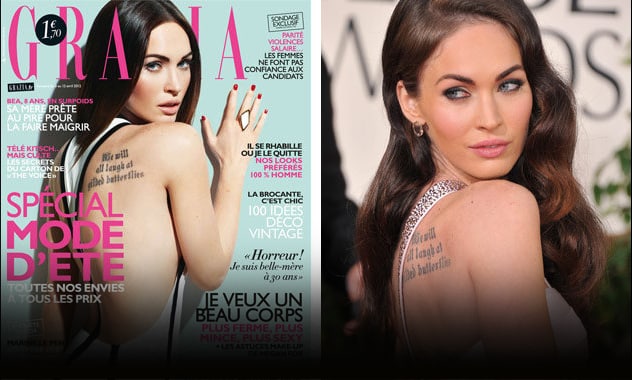 Everyone chill out: Megan Fox doesn’t have a superiority complex.

French fashion magazine Jalouse has retracted a quote it said came from the 26-year-old actress during an interview for its April 2012 issue.

The controversial quote? “I live well with my image, I can not complain, I would not trade my place with an ugly girl.”

But did Fox really say that? She says no, and she first fired back at the mag on March 30, writing on Facebook that translation errors had caused her to be misquoted:

Before this starts to circulate and spin into something else I want to address a “quote” that has started to run from an interview I did with a French magazine called Jalouse. The quote reads “i wouldn’t trade my place with an unattractive girl” Sigh. The actual comment, the context and it’s intention are grossly distorted and misrepresented here. I gave this interview in English obviously, it was then translated to French and now back into English. I’ve never made vapid self serving comments and in contradiction am uncontrollably self deprecating.

We have to admit, the syntax in the initial quote seemed a little suspect, like when we would try to do our Spanish homework in high school using Google Translate.

Jalouse, now, has confessed to the translation error and printed a retraction in their magazine. Fox took to her Facebook page thanking Jalouse for its correction: “Thank you Jalouse Magazine for printing the following retraction: “In a Jalouse cover story featuring Ms. Megan Fox, we unfortunately misquoted Ms. Fox. We apologize for any inconvenience this may have caused.”

Whew. Megan, your name has been cleared. Go relax and enjoy your maybe-pregnancy.