This year it is the 32nd Miami International Film Festival and we were asked to spread word about the event by getting people to sign up to see free movies.

Specifically we have 4 different films playing that we think you might be interested in: KURT COBAIN: MONTAGE OF HECK (the first fully-authorized movie about his life), SPRING (a Twilight-esque vampire love story), and BEING EVEL (about daredevil Evel Knievel). As well SWEET MICKY FOR PRESIDENT (A self-insert of the singer up against a corrupt government) which will be playing on the week following the other 3. All four movies have separate showtimes, and it it easily possible to make all four showings. If the movie descriptions below aren’t enough, see the trailers and further information via the links below each picture.The giveaways will all be split individually so make sure you sign up for all the ones you would like to watch!

Movie run time is 1 hour and 40 minutes. Click this link for more event details on this movie.


Evel Knievel was an unmistakable iconic of the late 60s and early 70s. His televised motorcycle jumps scored high TV ratings and his toy action figures flew off the shelves. He earned a place in the Guinness Book of World Records for “most bones broken of a lifetime.” (Like many quirky celebrities, he eventually settled in Florida.) Along with a risk-taking persona, he had a canny instinct for promotion and a blind spot for his dark side. All three of those qualities combined for his highly publicized attempt to jump Idaho’s Snake River Canyon in a custom made Skycycle.

Oscar-winning director Daniel Junge explores the good, bad and ugly of Evel’s life and career. Packed with spectacular stunt footage, the film is a nostalgia trip for anyone who recalls ABC’s Wide World of Sports and a revelation for younger viewers.

Evel gave inspiration to another generation of daredevils including BMX rider Mat Hoffman and MTV’s Jackass creators Jeff Tremaine and Johnny Knoxville who all serve as executive producers on this project.- Thom Powers

Movie run time is 2 hours and 12 minutes. Click this link for more event details on this movie.
After years in the making, Kurt Cobain: Montage of Heck delivers a portrait of the Nirvana singer like nothing before. The film draws upon personal archives of art, music and never-before-seen home movies interwoven with animation and candid interviews with his closest friends and family. His daughter Frances Bean Cobain serves as executive producer. The phrase “Montage of Heck” was the name of a musical collage Cobain created in 1988 as he was breaking into the Seattle music scene. After the release of Nirvana’s second album “Nevermind,” the band became world famous and Cobain was reluctantly cast as the voice of Generation X. Grappling with a tumultuous life and heroin addiction, he died at age 27 of an apparent suicide in 1994. Oscar-nominated director Brett Morgen has a track record of visual innovation in documentaries such as The Kid Stays in the Picture andChicago 10. He puts those skills to marvelous use in this passion project. – Thom Powers

Movie run time is 1 hour 49 minutes. Click this link for more event details on this movie.


All-American Evan (Lou Taylor Pucci, of Thumbsucker) should be on top of the world: he’s smart, young, handsome and has a winning personality. But when he loses his mother (his only family member) to a long and painful illness, he’s left in a tailspin and heads for the airport, where he literally takes the next departing flight (it happens to be going to Italy). Finding himself in the ancient coastal town of Bari, he parties with other slumming frat-boy tourists until he falls under the spell of the mysterious, classically beautiful Louise, a health care worker with more than a few bizarre secrets of her own. Meanwhile, Bari’s old world residents are on edge when a series of inexplicable supernatural deaths plague their tourist-centered economy.

There are traces of both the atmospheric Swedish thriller Let The Right One In and the Linklater Before Sunrise trilogy in this sophisticated, deeply-layered film. Just because we may find “the right one” in life, does it mean that destiny will lead us to the happy-ever-after? Hardly – there’s infinite opportunities for everything to go wrong and only a few to go toward good. – Jaie Laplante 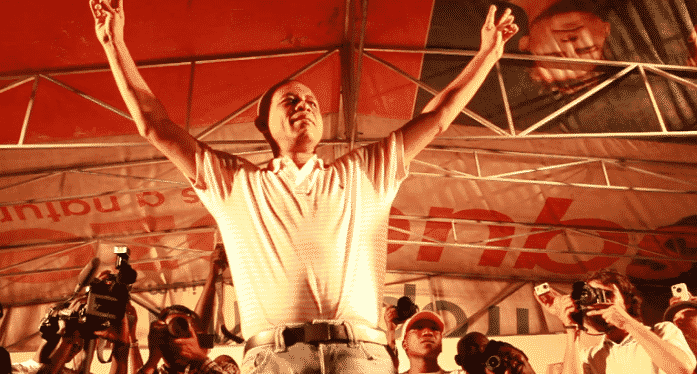 Movie run time is 1 hour 29 minutes. Click this link for more event details on this movie. SWEET MICKY FOR PRESIDENT follows Pras Michel, the founder of the hip-hop group The Fugees, as he returns to his homeland of Haiti after the 2010 earthquake and finds a corrupt government in paralysis. With no experience or money, Pras mobilizes a presidential campaign for the unlikeliest of candidates: Michel Martelly aka Sweet Micky, Haiti’s most popular and most controversial pop star. The politically inexperienced pair set out against a corrupted government, civil unrest, and a fixed election. When Pras’s former bandmate — superstar Wyclef Jean — also enters the presidential race, their chances seem further doomed. But despite the odds, they never give up on their honest dream of changing the course of Haiti’s future forever.