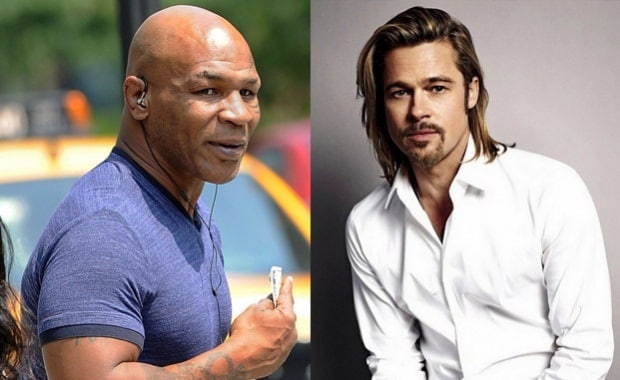 Few would choose to end up on Mike Tyson’s bad side, but when Brad Pitt got into bed with Tyson’s ex-wife, Robin Givens, he did just that.

During an interview for “In Depth with Graham Bensinger” on Yahoo! Sports, Tyson discussed the day he walked into ex-wife Givens’ house to find the “Head of the Class” actress in bed with the hunky heartthrob.

Tyson explained that while he and Givens were tending to divorce proceedings in 1988, they would still have sex. “I was getting a divorce. I was going to my lawyer’s office to divorce her that day but I wanted to sneak in a quickie.” Apparently, Givens was also spending time with Pitt. “This particular day, someone beat me to the punch,” Tyson told Bensinger. “I guess Brad got there earlier than I did. I was mad as hell. You should’ve saw his face when he saw me.”

In April, while speaking to Global Grind, Tyson told the Givens-Pitt story a bit differently.

“One day, I’m going to her house to bone her again and no one’s home, and I’m leaving and she’s pulling up with Brad Pitt, and I’m sad,” he said. At the time, Tyson did not recognize the superstar actor. “He wasn’t Brad Pitt back then. He was just some little beach-bum-looking dude. ‘Hey dude’ kind of guy. He was probably selling his body for money or something, I don’t know. He was very pretty.”

“I wasn’t thinking about attacking him,” Tyson told Global Grind. “I was just depressed I couldn’t bone her no more.”

Tyson’s marriage to Givens was marred by domestic abuse. Tyson has admitted he was a “savage” and a “pig” back then. Currently, the former heavyweight champion and “Hangover” actor is married to Lakiha “Kiki” Spicer, whom he credits with turning his life around.

“I married the woman of my dreams,” Tyson told The Sun in October. “She’s not dark like me. I want to die with her.”

Television & Social Media: Viewers Use Twitter As A Part Of The TV Experience
Shakira’s $100 Million Lawsuit: Ex-Boyfriend Left Not Choice But To File Suit