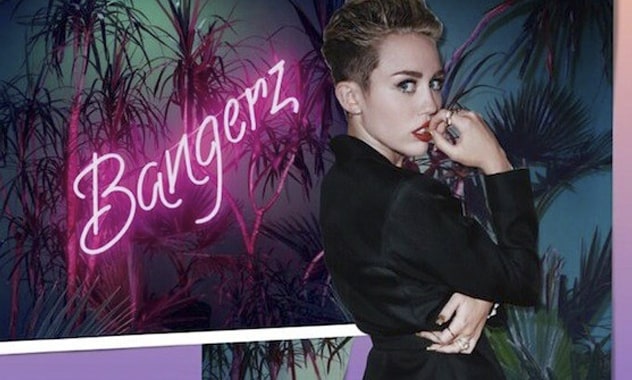 Before Miley Cyrus hit the stage at the MTV Video Music Awards Sunday night, the superstar singer gave fans a glimpse of what’s to come on her upcoming album.

The Queen of Twerk revealed the cover art for Bangerz on Twitter Saturday evening, writing, “You know the vintage YSL don’t stay on for long ‪#bangerz ‪#october8.”

In the seemingly ‘80’s inspired cover, Miley sports a short black trench coat and bites her nail, as a pink-lettered “Bangerz” blazes in the background in front of palm trees.

The “We Can’t Stop” singer also dropped her new single “Wrecking Ball” that night, a power ballad about heartbreak that will be featured on the album as well.

As for why she named her album Bangerz, Miley tweeted “If you don’t know why my record is called BANGERZ you’ll know as soon as you hear it. Nothin but #BANGERZ,” when she shared the album’s name with fans a few weeks ago.