“Inspirational, uplifting and a must-see for families.” ~  Kelli Gillespie, CW6
”If you don’t believe in Miracles, you will after watching this film!” – Debbie Matenopoulos/The Insider
”Touches the heart and speaks to the spirit.” – Chris Parente/KDVR-TV (FOX)

From the Producers Who Brought You Heaven is for Real

The Incredible True Story of a Young Girl’s Miracle 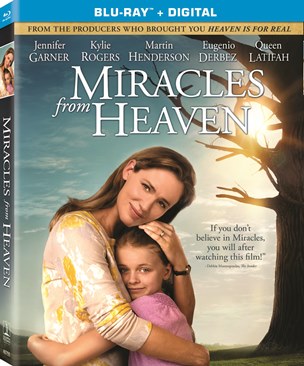 Bonus content on the MIRACLES FROM HEAVEN Blu-ray, DVD and digital releases include two featurettes, as well as commentary. Join Jennifer Garner, Queen Latifah, their costars and crew for a behind the scenes look at the making of this very special film, in “Miracles Abound: The Making of Miracles From Heaven.” Viewers will also meet the real-life Beam family and Dr. Nurko, learn about the casting of the film and the challenge of “the tree.” Shot at the Beam family ranch in Burleson, TX, “Bearing Witness,” features the Beam Family, their pastor, friends, first-responders and community as they gather around the tree and celebrate their faith and the miracles that brought them together. In the “Your Words” montage, experience some of the film’s most touching and memorable moments set against Third Day’s powerful rendition of the inspirational song. The Blu-ray and digital releases exclusively contain deleted scenes and the featurette “Accounts from Annabel,” where Christy and Anna reflect together on their past, present, future, faith and bonding over the past four years since the incident.

Synopsis: When Christy (Jennifer Garner) discovers her 10-year-old daughter Annabel (Kylie Rogers) has a rare, incurable disease, she becomes a ferocious advocate for her daughter’s healing as she searches for a solution. After Annabel has a freak accident and falls three stories, a miracle unfolds in the wake of her dramatic rescue that leaves medical specialists mystified, her family restored and their community inspired.

Based on the memoir by Christy Beam with a screenplay by Randy Brown, MIRACLES FROM HEAVEN is directed by Patricia Riggen. The film is produced by Joe Roth, T.D. Jakes and DeVon Franklin.

Additional exclusive Extras to the Blu-ray & Digital include:

MIRACLES FROM HEAVEN has a run time of approximately 109 minutes and is rated PG for thematic material, including accident and medical issues.

Academy Award® is the registered trademark of the Academy of Motion Picture Arts and Sciences.