Ethan Hunt is a daring, effective leader of the Impossible Mission Force and will stop at nothing to get the mission done, even if it means hanging outside of the tallest building in the world or slingshotting across skyscrapers. Hunt will next take on an anti-IMF and hang outside of a flying cargo plane. For Hunt, the mission is never impossible. This summer, he returns in MISSION: IMPOSSIBLE – ROGUE NATION in one of the biggest action movies of the year. Also starring Jeremy Renner, Ving Rhames, Simon Pegg, Alec Baldwin, and Rebecca Ferguson, the latest installment in the blockbuster franchise finds the IMF disbanded, and Ethan (Cruise) out in the cold, as the team now faces off against a network of highly skilled special agents, the Syndicate. Before you check out MISSION: IMPOSSIBLE – ROGUE NATION in theaters July 31, here are some memorable movie spies.
TOM CRUISE AS ETHAN HUNT IN MISSION: IMPOSSIBLE – ROGUE NATION (2015)
1. With the IMF now disbanded and Ethan Hunt (Tom Cruise) out in the cold, a new threat — called the Syndicate — soon emerges. The Syndicate is a network of highly skilled operatives who are dedicated to establishing a new world order via an escalating series of terrorist attacks. Faced with what may be the most impossible mission yet, Ethan gathers his team and joins forces with Ilsa Faust (Rebecca Ferguson), a disavowed British agent who may or may not be a member of this deadly rogue nation. 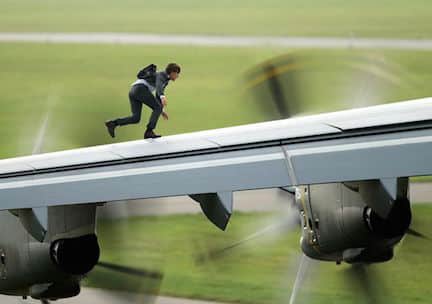 MATT DAMON AS JASON BOURNE IN THE BOURNE IDENTITY FRANCHISE
2. There’s nothing more deadly than a spy who doesn’t know he’s a spy until he starts snapping necks. Jason Bourne doesn’t know who he is, which almost makes him even deadlier since he’s got nothing to lose. Bourne doesn’t exactly go looking for trouble, and he actually ends up telling those in pursuit to stay away in order to avoid conflict. But his covert agency forces Bourne to bring the fight to their doorstep, and he doesn’t hesitate to take down everyone and everything trying to keep him from moving on from his dark past.

AGENT 007 IN JAMES BOND
3. Bond has the greatest gadgets, girls and cars. He’s seen several iterations, all with their own flare. Sean Connery is probably unanimously the best James Bond, but Daniel Craig is certainly giving him a run for his money, and even Roger Moore is a great representation of 007. Bond is cause for a genre all his own besides just being a series of spy movies. There are people who have never seen a single James Bond movie who still know his name, and that’s reason enough to be the best spy of all-time.

LIAM NEESON AS BRYAN MILLS IN TAKEN
4. Bryan Mills may be a retired CIA operative, but that doesn’t stop his special set of skills from coming in handy when his daughter gets kidnapped.

ANGELINA JOLIE AS EVELYN SALT IN SALT
5. It doesn’t get much better for Angelina Jolie than taking a role that was originally meant for a man and turning it into an outlandish action role for a woman. Tom Cruise was actually approached to play this role, but he already saw plenty of action as Ethan Hunt in Mission: Impossible by the time this project came around. Jolie’s character is one tough woman who doesn’t go down without a hellacious fight.

COLIN FIRTH AS HARRY HART IN KINGSMAN: THE SECRET SERVICE
6. The member of the Kingsman is not only dashing and polite, but shows that he is also tough, even if they’re driven by a chip that’s controlling their aggression from space.

BRAD PITT AND ANGELINA JOLIE AS JOHN AND JANE SMITH IN MR. AND MRS. SMITH
7. Since these two are much deadlier as a duo, we get a twofer from John and Jane Smith. After bringing Jason Bourne to the party a few years earlier, director Doug Liman journeyed into remake territory for a much more fun round of spy action. Brad Pitt and Angelina Jolie are both funny and lethal in this flick that’s quite an entertaining blend of genuinely good action and solid comedy. Whenever I see this movie I always thinks it’s a shame that Adam Brody didn’t go on to have a more successful film career, but I digress. For better or worse, we also wouldn’t have the power couple of Pitt and Jolie if it wasn’t for this movie.