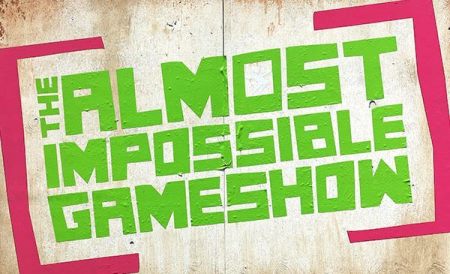 MTV announced a new comedy block as part of the Fall schedule, which includes the premiere of the brand new series “The Almost Impossible Game Show” which will debut Thursday, October 13 at 10:00 p.m.

“The Almost Impossible Game Show” is an absurd comedy game show that’s so hard to beat, contestants are given 40 lives…and probably still won’t win! Brought to you by the producers of “Wipe Out,” “The Almost Impossible Game Show” is based on the popular UK series of the same name. Each episode of this outlandish new series features six neon-clad contestants taking on simple, yet hilariously difficult games. To win, these brave contestants must complete four of the six games, without running out of lives. If they fail a game, they’ve got to do it again… and again… and AGAIN. Contestants don’t compete against each other, but against the game itself. With challenges such as riding a tiny bike across a balance beam over a mud pit, putting on a pair of trousers while sprinting on a giant treadmill, and inflating a balloon to the point of popping using only the power of your buttocks, contestants will never know what’s next. Comedy duo The Rubber Bandits provide anarchic commentary and their own twisted take as the contestants try to make the almost-impossible possible!

To tune in to all things “Almost Impossible Game Show,” checkout the Facebook page: at http://www.facebook.com/almostimpossiblemtv