On behalf of Universal Pictures and The New Founding Fathers of America, we are pleased to bring you the NEW trailer for THE PURGE: ANARCHY that has just debuted.

The sequel to summer 2013’s sleeper hit that opened to No. 1 at the box-office, sees the return of writer/director James DeMonaco to craft the next terrifying chapter of dutiful citizens preparing for their country’s yearly 12 hours of anarchy.  To witness some more horror, don’t forget to check out the newly launched site, PurgeTheLies.com where you can gain more information on the Purge’s opposition movement.

Watch and share the NEW chilling trailer and prepare to learn the truth when #PurgeAnarchy hits theaters July 18!

And click here to to be taken to Fandango’s ticket discount for the movie! Be quick, as it’s a limited time offer.

Based around the emerging Purge opposition movement led by Carmelo, PurgeTheLies.com allows you to read the New Founding Fathers of America’s (NFFA) manifesto, bios on anonymous leaders of the movement, view recruitment and propaganda videos, as well as “real” stats of who is being killed off and why. To learn more about NFFA and their mission visit http://purgethelies.com 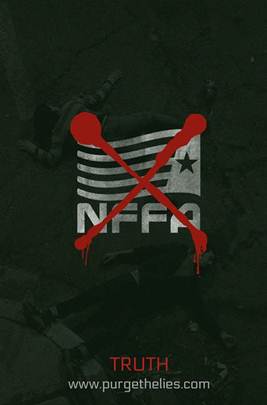 Visit all THE PURGE sites – #PurgeAnarchy